Delve into s'Arenal in Spain

Local time in s'Arenal is now 06:29 AM (Friday) . The local timezone is named " Europe/Madrid " with a UTC offset of 1 hours. Depending on your mobility, these larger destinations might be interesting for you: Algiers, Son Verí, Son Servera, Soller, and Santa Margalida. While being here, you might want to check out Algiers . We discovered some clip posted online . Scroll down to see the most favourite one or select the video collection in the navigation. Are you curious about the possible sightsseing spots and facts in s'Arenal ? We have collected some references on our attractions page.

Banzai is a state of the art attraction available at Aqualand El Arenal. Bathers slide down two water slides on a small plastic dinghy, then fall into a swimming pool after aquaplaning for 25 m at 50 ..

Palma de Mallorca Airport is an airport located 8 km east of Palma, Majorca, adjacent to the village of Can Pastilla. Also known as Son Sant Joan Airport or Aeroport de Son Sant Joan, it is the third largest airport in Spain, after Madrid's Barajas Airport and Barcelona Airport. During the summer months it is one of the busiest airports in Europe, and was used by 22.7 million passengers in 2011.

Son Ferriol is a town within the municipal borough of Palma, in Majorca. It is situated 6 km from the centre of Palma, between La Creu Vermella and Son Banya. At the north-eastern edge of the town there is the hamlet of S'Hostalot.

Air Europa Líneas Aéreas, S.A.U. is the third largest airline in Spain after Iberia and Vueling. The airline is headquartered in the Polígono Son Noguera in the Centro Empresarial Globalia in Llucmajor, Majorca, Spain. It also operates from Sweden and also tour services between northern and western Europe and holiday resorts in the Canary Islands and Balearic Islands. It also operates domestic scheduled services and long-haul scheduled services to North America and South America.

The Bay of Palma (Catalan: Badia de Palma, Spanish: Bahía de Palma) is a bay located to the south of Palma, Majorca, Spain. It is in the south-west of the Balearic Island of Mallorca. Palma de Majorca's harbour is located on the northern shores along with some famous beaches. Bounded to the west by Cape Cala Figuera, the north by the city of Palma, to the south by the Mediterranean Sea and the east by the White Cape. The Serra de Na Burguesa terminates at its shore.

More reading: Wikipedia Article
Located at 39.48 2.64 (Lat./Long.); Less than 10 km away
Tags: Bays of Spain, Bays of the Mediterranean, Geography of Majorca

Son Bonet Aerodrome (Spanish: Aeródromo de Son Bonet) was the first civil airfield on Mallorca. Originally built during the 1920s as an alternative to the military airport at Son Sant Joan, the first commercial flight was in 1927 and a flying school established in 1935. The airfield is located in the Marratxí municipality between Pont d’Inca and Pla de Na Tesa, which is in close proximity to Palma (only 5½ km north-east from the town centre). 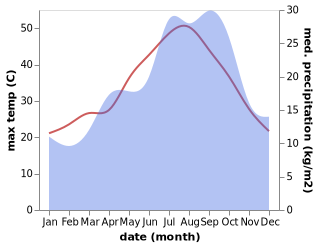