Time in Narathiwat is now 06:40 PM (Wednesday) . The local timezone is named " Asia/Bangkok " with a UTC offset of 7 hours. Depending on your travel resources, these more prominent places might be interesting for you: Surat Thani, Nakhon Si Thammarat, Medan, Ban Thon, and Yi-ngo. Being here already, consider visiting Surat Thani . We collected some hobby film on the internet . Scroll down to see the most favourite one or select the video collection in the navigation. Check out our recomendations for Narathiwat ? We have collected some references on our attractions page.

Narathiwat is one of the southern provinces (changwat) of Thailand. Neighboring provinces are (from west clockwise) Yala and Pattani. To the south it borders the Malaysian state of Kelantan. The southern railway line ends in this province, which is one of the nation’s five provinces that borders Malaysia. The province features a range of cultures as well as natural resources, and is relatively fertile.

Narathiwat is a town in southern Thailand and capital of the Narathiwat Province. The town is coterminous with the Mueang Narathiwat district and was established in 1936. As of 2008, the population was 40,521.

Princess of Naradhiwas University (PNU) is a government sponsored university in Narathiwat, southern Thailand. It was founded under the act on 9 February 2005 by merging all educational institutions in the province together. Those institutions are Narathiwat Technical College, Narathiwat Agricultural & Technology College, Takbai vocational college and Boromarjonani College of Nursing, Narathiwat.

The Faculty of Medicine, Princess of Naradhiwas University is a medical school located in Narathiwat, southern Thailand. The 18th medical school established in Thailand, founded in 2005, now the Medical School is run in collaboration with Songkhla Hospital. 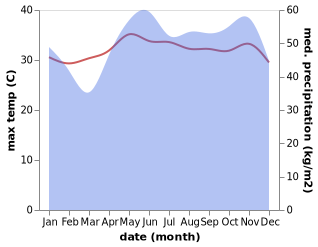