Delve into Su-ngai Padi in Thailand

Su-ngai Padi in the region of Narathiwat is located in Thailand - some 538 mi or ( 866 km ) South of Bangkok , the country's capital .

Local time in Su-ngai Padi is now 01:24 PM (Wednesday) . The local timezone is named " Asia/Bangkok " with a UTC offset of 7 hours. Depending on your mobility, these larger destinations might be interesting for you: Surat Thani, Nakhon Si Thammarat, Medan, Waeng, and Yaring. While being here, you might want to check out Surat Thani . We discovered some clip posted online . Scroll down to see the most favourite one or select the video collection in the navigation. Are you curious about the possible sightseeing spots and facts in Su-ngai Padi ? We have collected some references on our attractions page.

From Singapore to Bangkok We Go (Part 7)

Journey aboard the most luxurious train in south-east Asia along a 2000 km route through 3 countries. ..

Su-ngai Kolok is a main border town of Malaysia-Thailand Border in Narathiwat Province, Thailand. It is the capital of the Su-ngai Kolok district. As of 2005, the town has a population of 38,612. Across the border is Rantau Panjang, Kelantan, Malaysia.

Rantau Panjang is a town and also a parliamentary constituency in Kelantan which is located near the Malaysia-Thailand Border. Across the border is Sungai Golok, Thailand. Banks in Rantau Panjang include Maybank, Bank Simpanan Nasional and Agro Bank Malaysia.

Rantau Panjang-Sungai Golok Bridge, popularly called the "Harmony Bridge", is a road bridge crossing Kolok River of the Malaysia-Thailand border, connecting Rantau Panjang town in Kelantan, Malaysia, with Su-ngai Kolok town in Narathiwat, Thailand; spanning to the south of cross-border railway bridge nearby. The bridge is a part of Asian highway network AH18 AH18, including Thailand Route 4056 and Federal Route .

The 300 Years Mosque (Thai: มัสยิด 300 ปี) (also known as Al-Hussein Mosque or Talo Mano Mosque) is located in Ban Talo Mano, Tambon Subo Sawo. It is 25 kilometres from the city of Narathiwat, Thailand. Wan Hussein Az-Sanawi, who migrated from Ban Sano Yanya in Pattani Province, built the mosque in 1624. It was originally roofed with palm leaves, which later were replaced with fired clay tiles. The mosque is composed of two buildings connecting with each other. 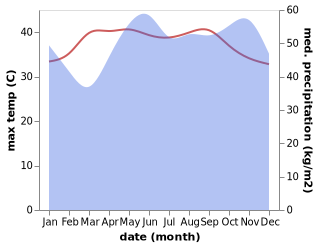