Time in Arua is now 03:05 PM (Tuesday) . The local timezone is named " Africa/Kampala " with a UTC offset of 3 hours. Depending on your travel resources, these more prominent places might be interesting for you: Kisumu, Ozumva, Vurra, Pajulu, and Owaffa. Being here already, consider visiting Kisumu . We collected some hobby film on the internet . Scroll down to see the most favourite one or select the video collection in the navigation. Check out our recomendations for Arua ? We have collected some references on our attractions page.

Arua is a town in Arua District, Northern Uganda. An important local commercial centre, it is a base for a large refugee population from Southern Sudan and the Democratic Republic of the Congo and is an aid distribution centre for those nations.

Arua Airport is a civilian airport in the town of Arua, Uganda. It is one of the forty-six (46) airports in the country.

Muni University (MU) is a public multi-campus university in Uganda. It is one of the public universities and degree-awarding institutions in the country.

Aru is a territory in Ituri District, Orientale Province, Democratic Republic of the Congo, and the name of the territory's administrative capital, Aru Town. The territory is located at the northern edge of the province, on the border with Uganda to the east and South Sudan to the north. During the 1998-2006 war in DRC, Aru was the base of the Ituri militia FAPC headed by Jerome Kakwavu.

More reading: Wikipedia Article
Located at 2.87 30.85 (Lat./Long.); Less than 18 km away
Tags: Ituri Interim Administration, Territories of the Democratic Republic of the Congo

Aru, Democratic Republic of the Congo

Aru is town and seat of Aru Territory in Ituri Province, Democratic Republic of the Congo. Aru has a small airport but no public electricity grid as of 2010. 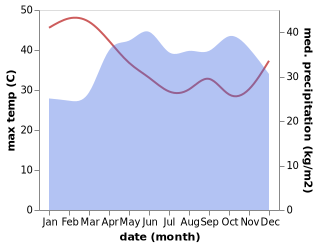