Local time in Luganville is now 04:25 PM (Tuesday) . The local timezone is named " Pacific/Efate " with a UTC offset of 11 hours. Depending on your flexibility, these larger cities might be interesting for you: Tembotalo, Tangis, Saraotou, Sanakoumbe, and Port Vila. When in this area, you might want to check out Tembotalo . We found some clip posted online . Scroll down to see the most favourite one or select the video collection in the navigation. Are you looking for some initial hints on what might be interesting in Luganville ? We have collected some references on our attractions page.

Welcome ceremony by the people of Aore Island, Santo, Vanuatu for the crews of the 2007 Brisbane to Vanuatu Cruise in Company and the opening of the Aore Island Clinic ..

Aore Island is an island in Sanma Province, Vanuatu. It is located opposite Luganville on Espiritu Santo and has an area of 58 km. Aore Island has diving and fishing. There are numerous resorts on the island catering for tourists, weddings and baptisms. Aore Island is a haven for divers, being right on the doorstep of world class wreck and reef diving. Several of the wreck dives include the SS President Coolidge, SS Tucker, and the MV Henry Bonneaud.

Santo-Pekoa International Airport is an airport in Luganville on Espiritu Santo in Vanuatu. Airports Vanuatu Limited provides aviation services for the airport.

Ratua, situated in the Vanuatu archipelago, is a 146-acre island located south of Espiritu Santo, between Aore and Malo islands. In the early 1900s, during the Anglo-French condominium colony, when the Vanuatu archipelago was originally named New Hebrides until its independence in 1980, the island of Ratua was an uninhabited French coconut plantation where copra was produced.

Bokissa is a very small island in the South Pacific island nation of Vanuatu located 10km south of Espiritu Santo. The island is owned and run as a tourist resort and is promoted as being managed in an environmentally responsible manner. 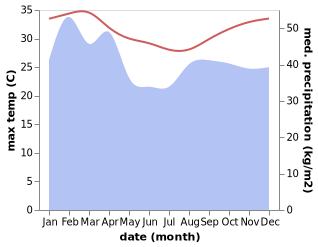