Current time in Isangel is now 10:15 AM (Friday) . The local timezone is named " Pacific/Efate " with a UTC offset of 11 hours. Depending on the availability of means of transportation, these more prominent locations might be interesting for you: Yimnakayip, Yarouareung, Yaoukouriruang, Sydney, and Port Vila. Since you are here already, make sure to check out Yimnakayip . We encountered some video on the web . Scroll down to see the most favourite one or select the video collection in the navigation. Where to go and what to see in Isangel ? We have collected some references on our attractions page.

Mt. Yasur volcano erupting at night It is on Tanna island, Vanuatu One of only a handful of volcanoes that you can get this close to as it erupts. ..

Highlights of tourism in Tanna island in the Southern province of TAFEA in Vanuatu. ..

Whitegrass resort is a small paradise. Excursion to custom village shows the lifestyle of remote people. ..

Tanna (sometimes spelled Tana) is an island of Vanuatu. It is 40 km (25 mi) long and 19 km (12 mi) wide, with a total area of 550 km² (212 sq mi). Its highest point is the 1,084 m (3,556 ft) summit of Mount Tukosmera in the south of the island. In the east, northeast of the peak, close to the coast, is where Siwi Lake was located until mid April 2000 when, following unusually heavy rain, the lake burst down the valley into Sulphur Bay, destroying the village with no loss of life.

Mount Tukosmera is the tallest mountain on Tanna, Vanuatu. It is located in the northwest of the island. It was a volcano in the Pleistocene, but is no longer active, unlike Mount Yasur. The mountain has special religious significance for the adherents of the John Frum movement, as a place from which gods come.

Mount Yasur is an active volcano on Tanna Island, Vanuatu (lat/long 19.52 S, 169.43 E) with a height of 361 m above sea level, located on the coast near Sulphur Bay. It lies to the southeast of the taller Mount Tukosmera, which was active in the Pleistocene. It has a largely unvegetated pyroclastic cone with a nearly circular summit crater 400 m in diameter. It is a stratovolcano, caused by the eastward-moving Indo-Australian Plate being subducted under the westward-moving Pacific Plate.

Sulphur Bay is a bay on the eastern side of Tanna island in Vanuatu. Nearby is Mount Yasur, called the world's most accessible volcano, and the area is the center of the John Frum cargo cult, a movement that believes their savior, an American World War II GI, resides within Yasur. Sulphur Bay was the first part of the island visited by Westerners, when the glow of Mount Yasur attracted James Cook in 1774. 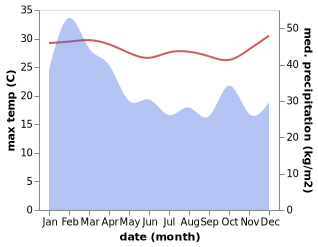