Delve into Lawdar in Yemen

Current time in Lawdar is now 08:43 PM (Friday) . The local timezone is named " Asia/Aden " with a UTC offset of 3 hours. Depending on your travel modalities, these larger destinations might be interesting for you: Zinjibar, Yusuf, Ta'izz, Sanaa, and Mukaymah as Sufla. While being here, make sure to check out Zinjibar . Are you curious about the possible sightsseing spots and facts in Lawdar ? We have collected some references on our attractions page.

The First Battle of Lawdar refers to the Yemeni army offensive, launched between 19 and 25 August 2010 on the city of Lawdar, that at the time was controlled by Al-Qaeda in the Arabian Peninsula. Several activists including local leaders of Al Qaeda were killed during the clashes. On 25 August Yemeni authorities claimed to regain control.

Lawdar is a town and seat of Lawdar District in south-western Yemen. It is located in the Abyan Governorate. It is served by Lawdar Airport.

Lawdar District is a district of the Abyan Governorate, Yemen. As of 2003, the district had a population of 88,155 inhabitants.

Maghadih is a village in south-western Yemen. It is located in the Abyan Governorate.

Jawf umm maqbabah is a village in south-western Yemen. It is located in the Abyan Governorate. 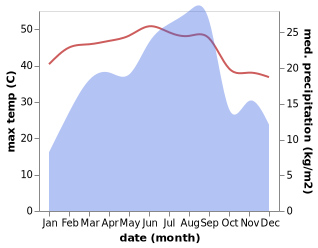