Leone in the region of Western District with its 4,050 inhabitants is a place in American Samoa - some 7 mi or ( 12 km ) South-West of Pago Pago , the country's capital city .

Time in Leone is now 07:58 PM (Saturday) . The local timezone is named " Pacific/Pago Pago " with a UTC offset of -11 hours. Depending on your budget, these more prominent locations might be interesting for you: Apia, Sogi, Utulei, Afono, and Aua. Since you are here already, consider visiting Apia . We saw some hobby film on the internet . Scroll down to see the most favourite one or select the video collection in the navigation. Where to go and what to see in Leone ? We have collected some references on our attractions page.

Hi-resolution video also available for download at marinedebris.noaa.gov The first half of this video shows marine debris washed out on to the coral reef offshore of Poloa, a village that was wiped ou ..

Hawaiian Airlines 767, departing beautiful American Samoa. Usually this is late overnight flight but today it was a daytime flight. Discovered that this specific plane, # N590HA, flew the first disast ..

This is look at AMERICAN SAMOA 2011 NEW YEARS EVE before the clock strikes 12 Midnight, This for all of you who are home sick and who is serving the Country and abroad hope you all like this clip, bec ..

Sunday ride out to Vaitogi; Alexya was at dance practice for Pacific Arts Festival. ..

Leone' is a village on the south-west coast of Tutuila Island, American Samoa.

WVUV was a radio station licensed to serve the community of Leone, American Samoa. The station, established in 1942, was owned and operated by South Seas Broadcasting, Inc. , when its broadcast license was cancelled in 2011. WVUV was a sister station to NBC TV station KKHJ-LP, which went by the WVUV-LP callsign until 2008.

WVUV-FM is a radio station licensed to serve the community of Fagaitua, American Samoa. The station is owned and operated by South Seas Broadcasting, Inc. It airs a Samoan and Polynesian favorites music format. The station was assigned the WVUV-FM call letters by the Federal Communications Commission on April 7, 2008.

KNWJ is a radio station broadcasting a Christian radio format. Licensed to Leone, American Samoa, the station is currently owned by Showers of Blessings Radio. The station was assigned the KNWJ call letters by the Federal Communications Commission on November 30, 1999. 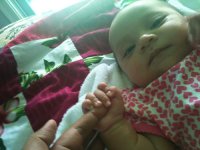