Local time in Malanje is now 03:10 AM (Sunday) . The local timezone is named " Africa/Luanda " with a UTC offset of 1 hours. Depending on your mobility, these larger cities might be interesting for you: Vulangombe de Baixo, Uíge, Quissol, N'dalatando, and Luanda. When in this area, you might want to check out Vulangombe de Baixo . We discovered some clip posted online . Scroll down to see the most favourite one or select the video collection in the navigation. Are you looking for some initial hints on what might be interesting in Malanje ? We have collected some references on our attractions page.

Malanje (also Malange) is the capital city of Malanje Province in Angola with a population of approximately 222,000. Nearby is the spectacular Calandula waterfalls, 85 km from the city. These falls are 105 metres high and their great width makes them the main tourist attraction in the region. It is a breathtaking sight. Pedras Negras de Pungo Andongo are massive black rocks. The greatest dam in the country is in Malanje, in the municipality of Capanda.

Malanje Airport or Malange Airport is an airport serving Malanje (also known as Malange) in Angola.

Lombe is a town in Angola in Malanje Province. 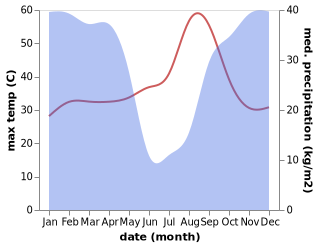