Local time in Şǝmkir is now 05:09 PM (Sunday) . The local timezone is named " Asia/Baku " with a UTC offset of 4 hours. Depending on your mobility, these larger cities might be interesting for you: Tabriz, Agdam, Grozny, Cherkessk, and Yeniabad. When in this area, you might want to check out Tabriz . Are you looking for some initial hints on what might be interesting in Şǝmkir ? We have collected some references on our attractions page.

Samukh is a rayon of Azerbaijan. Nəbiağalı settlement is its administrative center.

Shamkir is a rayon in Azerbaijan. It is located in the northwestern part of the Azerbaijan Republic. The rayon was previously called "Shamkhor" during the Soviet rule and was renamed to Shamkir only in 1991 after restoration of independence of Azerbaijan. The district was established in 1930. The capital of Shamkir Rayon is Shamkir city. 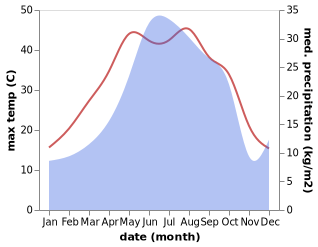