Time in Ijevan is now 04:42 AM (Sunday) . The local timezone is named " Asia/Yerevan " with a UTC offset of 4 hours. Depending on your budget, these more prominent locations might be interesting for you: Tabriz, Artashat, Erzurum, Makhachkala, and Grozny. Since you are here already, consider visiting Tabriz . Where to go and what to see in Ijevan ? We have collected some references on our attractions page.

Ijevan (Armenian: Իջևան; formerly, Istibulagh and Karavansara) is a city in Armenia and the capital of Tavush region. It is located in the northern part of the region, on the foot of Ijevan ridge and Nal'teket ridge on both banks of Aghstev River. The city's current name, Ijevan, and its former name Karavansara (until 1919) both mean "inn", in Armenian and Persian, respectively. The city's population as of 2009 is 20,500 making it the most populated city in the province.

Getahovit (Armenian: Գետահովիտ; until 1978, Tala) is a town in the Tavush Province of Armenia.

Tala is a town in the Tavush Province of Armenia.

Gandzakar (Armenian: Գանձաքար, also Romanized as Gandzak’ar; until 1978, Aghdan) is a town in the Tavush province of Armenia. The current Mayor of Gandzakar is Shahen Shahinyan. The Deputy Mayor is Zarmayil Mardanyan. The village actively works with Peace Corps Volunteers. 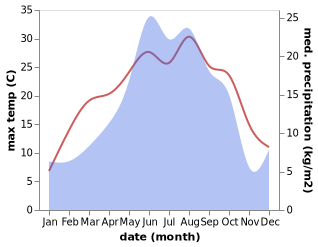