Local time in Vanadzor is now 02:19 PM (Thursday) . The local timezone is named " Asia/Yerevan " with a UTC offset of 4 hours. Depending on your flexibility, these larger cities might be interesting for you: Tabriz, Artashat, Erzurum, Doğubeyazıt, and Makhachkala. When in this area, you might want to check out Tabriz . We found some clip posted online . Scroll down to see the most favourite one or select the video collection in the navigation. Are you looking for some initial hints on what might be interesting in Vanadzor ? We have collected some references on our attractions page.

Dear friends and partners, All the staff of the HOTEL KIROVAKAN will be happy to welcome you in our restored space. The perfect setting Located in the highest summit, like an eagle's nest, the HOTEL K ..

Vogler- Concert Do Major I part.

Vogler- Concert Do Major I part. Performed by the II form pupil from the department of piano Shahane Miskaryan. Teacher: Arakelyan. Accompanied by the musicians of the Vanadzor City Hall; Director: R. ..

Vanadzor is the third largest city in Armenia and the capital of the Lori Province in the northern part of the country. It is located around 128 km north of the capital Yerevan. As of the 2009 estimate, the city had a population of 104,800, down from 148,876 reported at the 1979 official census. The city was known as Karakilisa (Gharakilisa) during the Russian Empire. After the fall of the Tsar, Vanadzor was briefly known as Martunakan.

Khndzorut (also, Vardanlu) is a town in the Lori Province of Armenia. 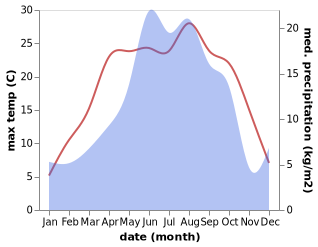