Time in Dobrush is now 01:09 PM (Saturday) . The local timezone is named " Europe/Minsk " with a UTC offset of 3 hours. Depending on your budget, these more prominent places might be interesting for you: Zyabrovka, Vyetka, Tarasovka, Stary Krupyets, and Rahachow. Being here already, consider visiting Zyabrovka . We collected some hobby film on the internet . Scroll down to see the most favourite one or select the video collection in the navigation. Check out our recomendations for Dobrush ? We have collected some references on our attractions page.

Aliaksei Zhyhalkovich ~ There Is Your Dance 2009

Aliaksei (or Alexei) Zhigalkovich won the Junior Eurovision competition in 2007. His website offers free mp3's of some of his songs (zhyhalkovich.by ). Please rate the video. Note there appear to be 2 ..

Dobrush is a town and region within the Homiel Voblast of Belarus. It is located on the Iput River. Mentioned for the first time in 1335. Dobrush is governed by a Regional Executive Committee, the chairman of which is Olga Mokhoreva. In 1986, the city suffered from heavy radioactive fallout from the Chernobyl accident.

Pribytki (also Zyabrovka) is an air base in Belarus located in Homiel Voblast, 16 km southeast of Gomel. In the early 1960s it was flying Tupolev Tu-16R aircraft. The airfield was renovated in 1963. It received the Tu-22R around 1966, and by 1967 had 24 based there. The reconnaissance aircraft were tasked with operations in the Baltic and northern Europe. From 1973 into the 1980s pilots from Libya and Iraq trained in the Tu-22 here.

Vetka is a small, historical town in Belarus, situated on the bank of the Sozh River. It is the principal centre in Vetka Raion in Gomel Region. It was established in 1685 by the Old Believer Priest Group (a branch of the Orthodox Christian Church)) who were known as the Theodesians and who had migrated from Central Russia. At the time it was founded, Vetka was on Lithuanian territory. 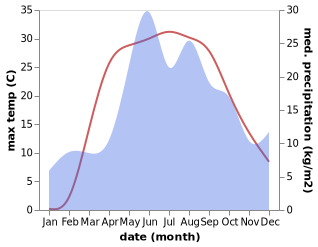