Usiazh in the region of Minskaya Voblastsʼ with its 1,500 inhabitants is a town in Belarus - some 22 mi or ( 35 km ) North-East of Minsk , the country's capital city .

Current time in Usiazh is now 12:04 AM (Tuesday) . The local timezone is named " Europe/Minsk " with a UTC offset of 3 hours. Depending on the availability of means of transportation, these more prominent locations might be interesting for you: Riga, Daugavpils, Pskov, Vilnius, and Zhodzina. Since you are here already, make sure to check out Riga . Where to go and what to see in Usiazh ? We have collected some references on our attractions page.

The Mound of Glory is a memorial complex honouring Soviet soldiers who fought during World War II, located 21 km from Minsk, Belarus on the Moscow Highway. Designed by O. Stakhovich and sculpted by A. Bembel, it was established in 1969 on the 25th anniversary of the liberation of Belarus during Operation Bagration (1944).

Lahoysk is a city in the Minsk Region of Belarus and the administrative center of the Lahoysk Raion. First chronicled in 1078, Lahoysk was the center of a small 12th-century principality, later absorbed into the Principality of Polotsk. In the 18th and 19th centuries, it was a seat of the Tyszkiewicz noble family. The modern city has a ski resort named Silichy. \t\t \t\t\tBelarus-Lahoisk-Region Executive Committee. jpg \t\t\t Lahoysk Raion executive committee. \t\t\t \t\t \t\t \t\t\tLahoisk2.

Logoisk crater is a meteorite impact crater in Belarus near the city of Lahojsk. It is 15 km in diameter and the age is estimated to be 42.3 ± 1.1 million years. The crater is not exposed at the surface. 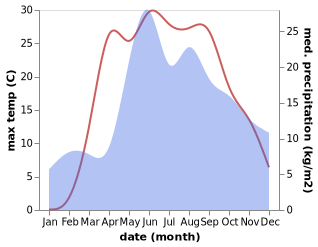