Delve into Pleven in Bulgaria

Local time in Pleven is now 07:14 PM (Thursday) . The local timezone is named " Europe/Sofia " with a UTC offset of 2 hours. Depending on your mobility, these larger destinations might be interesting for you: Iaşi, Craiova, Cluj-Napoca, Bucharest, and Yasen. While being here, you might want to check out Iaşi . We discovered some clip posted online . Scroll down to see the most favourite one or select the video collection in the navigation. Are you curious about the possible sightsseing spots and facts in Pleven ? We have collected some references on our attractions page.

This is in Kaylaka - а protected area near the town of Pleven, Bulgaria. Near the (dam?) lake there. These rocks "above" the road look a little dangerous... Add &fmt=18 at the end of the link if you w ..

The Siege of Plevna, or Siege of Pleven, was a major battle of the Russo-Turkish War (1877–1878), fought by the joint army of Russia and Romania against the Ottoman Empire. The Ottoman defense held up the main Russian advance southwards into Bulgaria, encouraging other great powers of the time to actively support the Ottoman cause. Eventually, superior Russian and Romanian numbers forced the garrison to capitulate.

Pleven is the seventh most populous city in Bulgaria. Located in the northern part of the country, it is the administrative centre of Pleven Province, as well as of the subordinate Pleven municipality. Internationally known for the Siege of Plevna of 1877, it is today a major economic centre of the Bulgarian Northwest and Central North and the third largest city of Northern Bulgaria after Varna and Rousse.

Storgosia was a road station of Ancient Rome located in the vicinity of modern Pleven, north-central Bulgaria, in the modern Kaylaka Park. It accommodated detachments of Legio I Italica's Novae (modern Svishtov) garrison. The station grew to become a fortress in Late Antiquity due to Gothic and other Barbarian raids after 238. 31,000 m² were fortified in the beginning of the 4th century with a 2.20 m-wide defensive wall.

The Ivan Radoev Dramatic Theatre (Bulgarian: Драматичен театър ”Иван Радоев”, Dramatichen teatar ”Ivan Radoev”) is a theatre in Pleven, Bulgaria. Its edifice in the centre of the city was designed by an Austro-Hungarian architect and built 1893-1895. The theatre was founded in 1918 as the Pleven Municipal Theatre, the first premiere being Kean by Alexandre Dumas, père (6 February 1919).

Pleven Stadium or Stadium Slavi Aleksiev is a multi-purpose stadium in Pleven, Bulgaria. It is currently used mostly for football matches. The stadium holds 21,940 people and it was built in 1952. 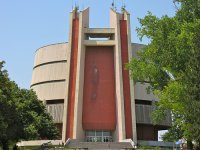 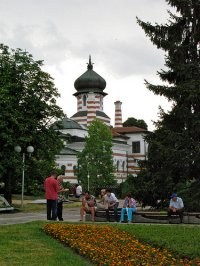 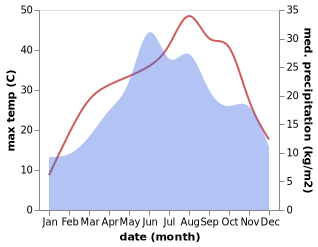