Time in Lillooet is now 12:00 AM (Thursday) . The local timezone is named " America/Vancouver " with a UTC offset of -7 hours. Depending on your travel resources, these more prominent places might be interesting for you: Bellingham, Everett, Olympia, Seattle, and Tacoma. Being here already, consider visiting Bellingham . We collected some hobby film on the internet . Scroll down to see the most favourite one or select the video collection in the navigation. Check out our recomendations for Lillooet ? We have collected some references on our attractions page.

First Nations students describe what it is like to fish for salmon with a dip net. ..

Wild Steelhead Fishing in BC, Canada. This video was filmed in Lillooet, BC on the Fraser River, January 29/ 2012 and January 30/2012. The first day I fished for Approximately 1 hour, caught 2 Steelhe ..

Twilight on the Rails Trailer

This powerful documentary from White River Productions covers the controversy surrounding the end of passenger service on BC Rail in October 2002. www.MarcamProductions.com ..

Video Introduction to my collection of videos shot in 2002 in British Columbia. More to come! ..

Lillooet, formerly Cayoosh Flat, is a community on the Fraser River in British Columbia, Canada, about 240 kilometres up the British Columbia Railway line from Vancouver. Situated at an intersection of deep gorges in the lee of the Coast Mountains, it has a dry climate- 329.5 millimetres of precipitation is recorded annually. Lillooet has a long growing season, and once had prolific market gardens and orchard produce.

Lillooet Railway Station is a former BC Rail Station located in Lillooet, British Columbia. The station is served at least once a day by the Koaham Shuttle.

The Seton River is a tributary of the Fraser River in the Canadian province of British Columbia.

Bridge of the Twenty-Three Camels

Bridge of the Twenty-Three Camels is the official name of the highway bridge over the Fraser River at Lillooet, British Columbia, Canada, on BC Highway 99. It replaced the older 1913-vintage Lillooet Suspension Bridge, just upstream, which had no highway designation but connected the town to BC Highway 12, a designation which today only refers to the Lillooet-Lytton highway but, until the extension of the 99 designation from Pemberton, also included the Lillooet-Cache Creek highway. 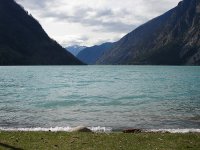