Local time in Rongwo is now 07:16 AM (Thursday) . The local timezone is named " Asia/Chongqing " with a UTC offset of 8 hours. Depending on your flexibility, these larger cities might be interesting for you: Xining, Laxiong, Quguoqiongwa, Sangke, and Wangge'ertang. When in this area, you might want to check out Xining . We found some clip posted online . Scroll down to see the most favourite one or select the video collection in the navigation. Are you looking for some initial hints on what might be interesting in Rongwo ? We have collected some references on our attractions page.

The Tongren Festival Began With Shaman #1

TravelsWithSheila.com The Festival began with a fast hike up the hill at altitude trying not to miss any part of the Tongren Aboriginal Festival held once a year. This video highlights Shaman #1 in a ..

Preview of Danilovescats's blog at TravelPod. Read the full blog here: www.travelpod.com This blog preview was made by TravelPod using the TripAdvisor™ TripWow slideshow creator. Learn more about thes ..

This short film, created by Wen Xiangcheng, depicts the Luru festival, a communal ritual performed by Tibetans in the Rebgong valley in the northeast of China's Qinghai Province. This ritual thanks lo ..

Qinghai Province and the foothills of Tibet Clairedonze's photos around Tongren, China

Preview of Clairedonze's blog at TravelPod. Read the full blog here: www.travelpod.com This blog preview was made by TravelPod using the TripAdvisor™ TripWow slideshow creator. Learn more about these ..

Rongwo Monastery also known as Longwu in Chinese is a Tibetan Buddhist monastery in Tongren, Huangnan Prefecture, Qinghai, China (known as Rebkong Town in Amdo to Tibetans) and is 186 km from Xining.

Huangnan Tibetan Autonomous Prefecture is an autonomous prefecture of Qinghai province in China. The prefecture has area of 17,921 km² and its capital is Tongren county.

Tongren County known to Tibetans as Rebkong in the region previously known as Amdo is the capital and second smallest administrative subdivision by area within Huangnan Tibetan Autonomous Prefecture in Qinghai Province, China. The county has an area of 3465 square kilometers and a population of ~80,000 (2002), 75% Tibetan. The economy of the county includes agriculture and aluminum mining. 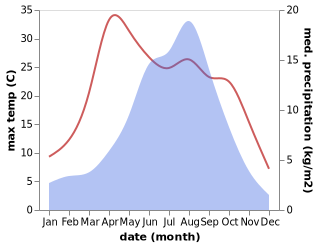