Current time in Yanjing is now 02:37 AM (Saturday) . The local timezone is named " Asia/Chongqing " with a UTC offset of 8 hours. Depending on the availability of means of transportation, these more prominent locations might be interesting for you: Wufeng, Zhaxi, Yujin, Yibin, and Xunchang. Since you are here already, make sure to check out Wufeng . Where to go and what to see in Yanjing ? We have collected some references on our attractions page.

The 1974 Zhaotong earthquake occurred at 19:25 UTC on 10 May. It had a magnitude that was measured at 7.0 on the moment magnitude scale and 7.1 on the surface wave magnitude scale. It had a maximum perceived intensity of IX (Violent) on the Mercalli intensity scale. The epicenter was located in Zhaotong prefecture in Yunnan province and it caused about 20,000 deaths. 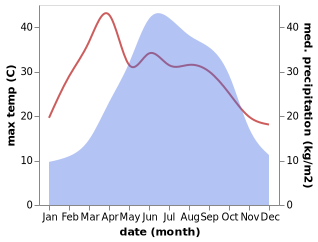