Explore The Settlement in Christmas Island

Advertising
Interactive map of The Settlement

Time in The Settlement is now 10:40 AM (Thursday) . The local timezone is named " Indian/Christmas " with a UTC offset of 7 hours. Depending on your budget, these more prominent locations might be interesting for you: Tasikmalaya, Majenang, Kawalu, Ciamis, and Bandung. Since you are here already, consider visiting Tasikmalaya . We saw some hobby film on the internet . Scroll down to see the most favourite one or select the video collection in the navigation. Where to go and what to see in The Settlement ? We have collected some references on our attractions page.

"The Time is NOW Our Time" "Ascension" Ascension is where we are moving towards. Sooner or later. All of us. As We Release Our Mortal Confines ~ We Actually Lighten Up ~ Raise Our Vibrations Through L ..

This is my winning Film for the Underwater Festival 2010. It was shot over 5 days and 10 dives at Christmas Island It was shot on a Sony FX7 in a Amphbico Endeavor Housing with a flat port. The light ..

Driving into the settlement on Christmas island

Christmas island. driving down the hill to the settelment ..

"I purchased a Solitude 4 with the Standard Spool from Derek McKenzie Fly Fishing in Australia just before leaving on my third trip to Christmas Island. When it arrived it just looked and felt like qu ..

On 15 December 2010, a boat carrying around 90 asylum seekers, mostly from Iraq and Iran, sank off the coast of Christmas Island, an Australian territory in the Indian Ocean, killing 48 people aboard; 42 survivors were rescued. The boat was later named SIEV-221.

Silver City is a settlement on Christmas Island. In terms of ethnicity its inhabitants are Chinese and European with some Malay. The settlement was built in the 1970s, with aluminum/metal houses that were supposed to be cyclone proof.

Christmas Island District High School is a school located in Christmas Island, a territory of Australia. The school serves approximately 400 students from Kindergarten through to Year 12. The school is operated by the Department of Education (Western Australia). 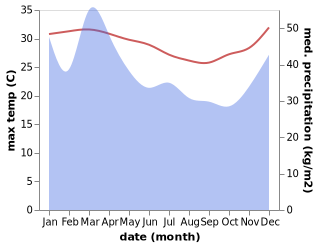