Čakovec in the region of Međimurska with its 15,867 citizens is located in Croatia - some 45 mi or ( 72 km ) North-East of Zagreb , the country's capital city .

Time in Čakovec is now 06:32 PM (Monday) . The local timezone is named " Europe/Zagreb " with a UTC offset of 1 hours. Depending on your budget, these more prominent places might be interesting for you: Graz, Szombathely, Budapest, Bratislava, and Prague. Being here already, consider visiting Graz . We collected some hobby film on the internet . Scroll down to see the most favourite one or select the video collection in the navigation. Check out our recomendations for Čakovec ? We have collected some references on our attractions page.

This is a short greeting video with Arca Noa Funny Menagerie. ..

Čakovec is a city in northern Croatia, located around 90 kilometres north of Zagreb, the Croatian capital. Čakovec is both the county seat and largest city of Međimurje County, the northernmost, smallest and most densely populated Croatian county.

Čakovec Castle or Zrinski Castle (Croatian: Čakovečka utvrda or Stari grad Zrinskih) is a castle in Čakovec, northern Croatia. The castle is located in Zrinski Park, not far from the city's central square. It was built in the 13th century by Count Dimitrius Csáky, after whom the city of Čakovec is named. It was later owned by many others, including the House of Lacković, the Counts of Celje as well as the Counts of Ernušt, Counts of Zrinski, Althan, Feštetić and others.

Škola Animiranog Filma (ŠAF) is a school of animation located in Čakovec, Croatia. The program's intent is not career development, but to promote cognition, imagination, perseverance, cooperation and pride in one's work for children between the ages of 8 and 12 years old. Edo Lukman has been the head of the school since its founding on February 28, 1975. Since then, over a hundred animated short films have been created by more than 500 children enrolled in the program.

Stadion SRC Mladost is a multi-purpose stadium in Čakovec, Croatia. The approximate capacity of the stadium is 8,000 places, including around 5,000 seats. The stadium is owned by the city of Čakovec and primarily used for football matches and various athletics events. The football clubs currently using the stadium as their home ground are NK Čakovec and NK Međimurje. Occasionally, it is also used to stage concerts and similar events. 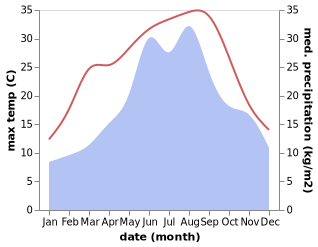