Delve into Sisak in Croatia

Sisak in the region of Sisačko-Moslavačka with its 35,748 residents is located in Croatia - some 31 mi or ( 50 km ) South-East of Zagreb , the country's capital .

Local time in Sisak is now 02:11 AM (Saturday) . The local timezone is named " Europe/Zagreb " with a UTC offset of 1 hours. Depending on your mobility, these larger destinations might be interesting for you: Budapest, Bratislava, Rome, Zazina, and Zagreb. While being here, you might want to check out Budapest . We discovered some clip posted online . Scroll down to see the most favourite one or select the video collection in the navigation. Are you curious about the possible sightsseing spots and facts in Sisak ? We have collected some references on our attractions page.

Sisak is a city in central Croatia. The city's population in 2011 was 33,049, with a total of 49,699 in the administrative region and it is also the administrative centre of the Sisak-Moslavina county. Sisak is located at the confluence of the Kupa, Sava, and Odra rivers, 57 km southeast of the Croatian capital Zagreb.

Gradski Stadion is a multi-use stadium in Sisak, Croatia. It serves as home stadium for football club HNK Segesta. The stadium all seating capacity is 8,000 spectators.

The Kupa or Kolpa river, known in Roman times as Colapis, forms a natural border between north-west Croatia and southeast Slovenia. It is 297 kilometres long, with its border part having a length of 118 km and the rest located in Croatia. The Kupa originates in Croatia in the mountainous region of Gorski kotar, northeast of Rijeka, in the area of Risnjak National Park. It flows a few kilometers eastwards, receives the small river Čabranka from the left, before reaching the Slovenian border.

Cathedral of Exaltation of the Holy Cross (Croatian: Katedrala Uzvišenja svetog Križa) is a cathedral in the Diocese of Sisak. It is located in the center of Sisak on Ban Jelačić Square.

Novo Pračno is a village in Croatia. It is connected by the D224 highway. 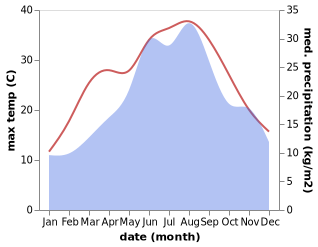