Banja Luka in the region of Republika Srpska with its 221,106 habitants is a town located in Bosnia and Herzegovina - some 86 mi or ( 139 km ) North-West of Sarajevo , the country's capital .

Local time in Banja Luka is now 09:02 PM (Monday) . The local timezone is named " Europe/Sarajevo " with a UTC offset of 1 hours. Depending on your flexibility, these larger cities might be interesting for you: Pristina, Belgrade, Budapest, Bratislava, and Zagreb. When in this area, you might want to check out Pristina . We found some clip posted online . Scroll down to see the most favourite one or select the video collection in the navigation. Are you looking for some initial hints on what might be interesting in Banja Luka ? We have collected some references on our attractions page.

Song by young Srna Majar about her city ..

The Republika Srpska Securities Commission (Serbian: Комисија за хартије од вриједности Републике Српске or Komisija za hartije od vrijednosti Republike Srpske) is a financial services regulator in Republika Srpska, Bosnia and Herzegovina. It is based in the city of Banja Luka. In Bosnia, the two political entities Republika Srpska and the Federation have each taken separate responsible for the regulation and development of capital markets within their own territories.

Banja Luka or sometimes Banjaluka, in Cyrillic Бања Лука, or Бањалука), is the second largest city in Bosnia and Herzegovina and the administrative capital and largest city of the Republika Srpska entity. Traditionally it has been the center of the Bosanska Krajina region, located in the north-western part of the country. It is home of the University of Banja Luka, as well as numerous state and entity institutions of Bosnia and Herzegovina.

Arnaudija Mosque, built in 1594, was a large mosque in Banja Luka, Bosnia and Herzegovina before it was destroyed by the Army of Republika Srpska on 7 May 1993. The mosque was demolished by explosives on May 7, 1993, by the Serb militia. The demolition was organized by the authorities of the Republika Srpska which included the demolition of the entire Arnaudija mosque complex and Ferhadija mosque complex that were approximately 800 m distant from each other.

The Cathedral of Saint Bonaventure in Banja Luka is one of four Roman Catholic cathedrals in Bosnia and Herzegovina. It is the seat of the Banja Luka Bishopric currently led by Bishop Franjo Komarica. The Cathedral was built in honor of Saint Bonaventure, a Franciscan theologian from the Middle Ages. It was constructed by Alfred Pichler in the 1970s after the original had been damaged in an earthquake. 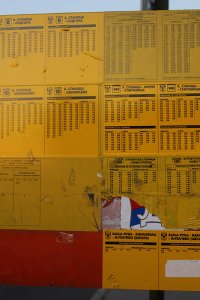 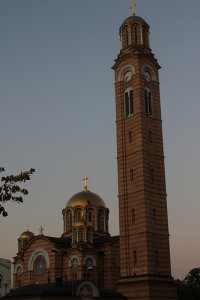 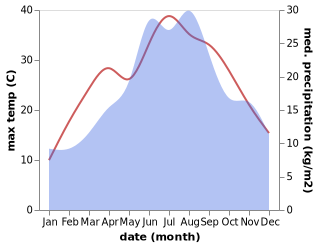