Copenhagen in the region of Capital Region with its 1,153,615 inhabitants is a town in Denmark and is the capital of this country.

Current time in Copenhagen is now 01:58 AM (Wednesday) . The local timezone is named " Europe/Copenhagen " with a UTC offset of 1 hours. Depending on the availability of means of transportation, these more prominent locations might be interesting for you: Vallensbæk, Tommerup, Tårnby, Roskilde, and Rødovre. Since you are here already, make sure to check out Vallensbæk . We encountered some video on the web . Scroll down to see the most favourite one or select the video collection in the navigation. Where to go and what to see in Copenhagen ? We have collected some references on our attractions page.

We Are Maersk - Corporate Movie

Join us on a journey that will take you to some of the busiest city centers and most remote and inhospitable places on earth. Internationally acclaimed movie director Christoffer Boe and his team trav ..

Copenhagen has lots of idyllic parks. Its most royal is the King's Garden surrounding the Rosenborg Castle, summer residence to Denmark's "big personality" king, Christian IV, who ruled from 1588 unti ..

The Radisson Blu Royal Hotel is a hotel in Copenhagen, that was designed by Danish architect and designer Arne Jacobsen for the airline Scandinavian Airlines System (SAS) between 1956 and 1960. At its completion the hotel was the largest in Denmark, at 69.60 meters in height, the first skyscraper in Copenhagen until 1969 and at the same time the tallest building in Denmark. In 2009, it was the seventh highest tower in Denmark.

Vesterport Station is a railway station in the city centre of Copenhagen, Denmark. The station is situated below ground level on the Boulevard Line, just before the tunnel connecting Copenhagen Central Station and Østerport Station. Opened on 15 May 1934, it only serves the S-train network.

The City Hall Square is a public square in the centre of Copenhagen, Denmark, located in front of the Copenhagen City Hall. Due to its large size, its central location and its affiliation with the city hall, it is a popular venue for a variety of events, celebrations and demonstrations. It is often used as a central datum for measuring distances from Copenhagen.

Jens Olsen's World Clock or Verdensur is an advanced astronomical clock which is displayed in Copenhagen City Hall. The clock was designed and calculated by Jens Olsen who was a skilled locksmith, but later learned the trade of clockmaking. He also took part in the beginning of the clock's construction, but died in 1945, 10 years before the clock was completed. The clock consists of 12 movements which together have over 14,000 parts. The clock is mechanical and must be wound once a week.

Dansk Sprognævn ("Danish Language Committee") is the official regulatory body of the Danish language as a part of the Danish Ministry of Culture, and resides at the University of Copenhagen. It was established in 1955. 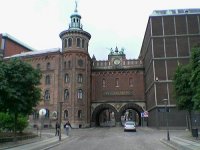 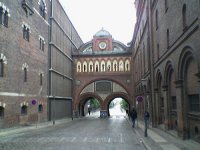 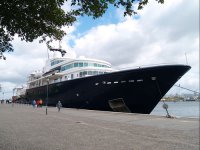 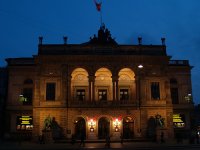 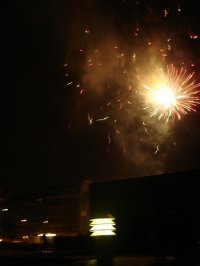 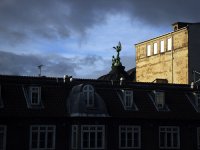 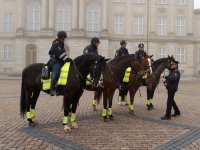 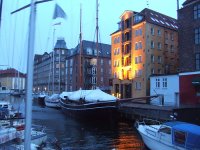 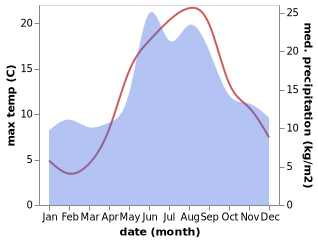