Current time in Bata is now 09:24 PM (Wednesday) . The local timezone is named " Africa/Malabo " with a UTC offset of 1 hours. Depending on the availability of means of transportation, these more prominent locations might be interesting for you: Yaoundé, Ebolowa, Douala, Selies, and Nasanga. Since you are here already, make sure to check out Yaoundé . We saw some video on the web . Scroll down to see the most favourite one or select the video collection in the navigation. Where to go and what to see in Bata ? We have collected some references on our attractions page.

Estadio La Libertad is a football only stadium in Bata, Equatorial Guinea. It is currently used mostly for football matches. The stadium has a capacity of 4,000 people and is a small municipal stadium in the centre of Bata and located near the sea across the road from Hotel Panafrica. An artificial pitch was installed at the stadium in August 2010. The stadium consists of 3 separate pavilions with the north end open.

Bata is a port city in the Litoral Province of Equatorial Guinea. With a 2005 estimated population of 173,046, it is the largest city in Equatorial Guinea. It lies on the Atlantic Ocean coast of Río Muni. Bata was formerly capital of Equatorial Guinea and is a transport hub and port, from which ferries sail to Malabo and Douala, and fliers can land at Bata Airport. It is also known for its nightlife and market.

Estadio de Bata is a multi-use stadium in Bata, Equatorial Guinea. The stadium had a capacity of 22,000 people and recently was expanded to 37,500 seats as one of the host stadiums for the 2012 Africa Cup of Nations including the opening ceremony and semi-final. The stadium, was completed in 2007. It was a venue for the 2008 Women's African Football Championship.

Bata Airport is the second largest airport in Equatorial Guinea, after Malabo Airport, and is the only other paved runway. 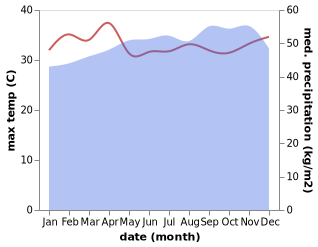