Current time in Franceville is now 10:55 AM (Thursday) . The local timezone is named " Africa/Libreville " with a UTC offset of 1 hours. Depending on the availability of means of transportation, these more prominent locations might be interesting for you: Pointe-Noire, Loubomo, Brazzaville, Bata, and Kinshasa. Since you are here already, make sure to check out Pointe-Noire . Where to go and what to see in Franceville ? We have collected some references on our attractions page.

Franceville is one of the four largest cities in Gabon, with a population of around 56,000 (2010, approx. ) people. It lies on the River Mpassa and at the end of the Trans-Gabon Railway and the N3 road. It grew from a village named Masuku when Pierre Savorgnan de Brazza chose it to resettle former slaves and renamed it "Francheville" (meaning "city of the freed" in French) in 1880. The city later came to be called Franceville.

Haut-Ogooué is one of Gabon's nine provinces. It is named after the Ogooué River. It covers an area of 36,547 km². The provincial capital is Franceville. One of its primary industries is mining, with manganese, gold and uranium being found in the region. The uranium-bearing mineral Francevillite takes its name from the primary city. It is the historical home of three cultures, the Obamba, Ndzabi and Téké.

Mpassa is a department of Haut-Ogooué Province in south-eastern Gabon. The capital lies at Franceville.

The Stade de Franceville is a stadium in Franceville, Gabon. The 35000 capacity stadium was opened in January 2012, in time for its use in the 2012 African Cup of Nations. The opening game was a friendly between Gabon and Sudan. 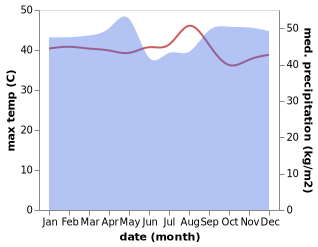