Time in Sukhumi is now 06:59 AM (Sunday) . The local timezone is named " Asia/Tbilisi " with a UTC offset of 4 hours. Depending on your budget, these more prominent locations might be interesting for you: Erzurum, Erzincan, Maykop, Cherkessk, and Zugdidi. Since you are here already, consider visiting Erzurum . We saw some hobby film on the internet . Scroll down to see the most favourite one or select the video collection in the navigation. Where to go and what to see in Sukhumi ? We have collected some references on our attractions page.

A documentary about the tragedies that took place during the 1992-1993 Georgian - Abkhaz war, which came into conclusion in september 1993 with the massacres in and around Sukhumi, the capital of Abkh ..

Sukhumi; is the capital of Abkhazia, a disputed region on the Black Sea coast. The city suffered heavily during the Georgian–Abkhazian conflict in the early 1990s.

Guma is a village in Abkhazia.

Sukhumi Botanical Garden is one of the oldest botanical gardens in the Caucasus. It was founded in 1840 as Sukhum-Kale Military-Botanical Garden by the head of the Russian Black Sea fortification line N. N. Rayevsky with the purpose of the introduction of new plants in the region. It was ravaged by Turkish forces in 1853-55 and 1877-78 in the course of the Russo-Turkish wars. The garden was transferred to civil authorities in 1889 and the restoration of the plantings was begun in 1894.

The Abkhazian State University is the only university in Georgia's breakaway republic of Abkhazia. It was founded in 1979 on the basis of the Sukhumi Pedagogical Institute. Its first rector was Zurab Anchabadze. The university consists the departments of physics and mathematics, biology and geography, history, philology, economics, law; pedagogical and agro-engineering departments.

The Besleti Bridge also known as the Queen Tamar Bridge is a medieval arched stone bridge at Sukhumi, Georgia’s breakaway republic of Abkhazia. Located some 6 km from the city centre, the bridge spans the small mountain River Besletka, and dates back to the late 12th century. 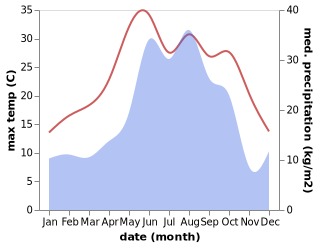