Delve into Zestap'oni in Georgia

Current time in Zestap'oni is now 05:20 PM (Friday) . The local timezone is named " Asia/Tbilisi " with a UTC offset of 4 hours. Depending on your travel modalities, these larger destinations might be interesting for you: Erzincan, Grozny, Zugdidi, Zestap'oni, and Zeda Sak'ara. While being here, make sure to check out Erzincan . We encountered some video on the web . Scroll down to see the most favourite one or select the video collection in the navigation. Are you curious about the possible sightsseing spots and facts in Zestap'oni ? We have collected some references on our attractions page.

Zestafoni or Zestaponi (correct pronunciation - Zestaphoni) is the administrative center of Zestafoni District in Western Georgia. Zestafoni is the center of an ancient, historical part of Georgia - Margveti, which is a part of Imereti province. Zestafoni is the Center of Margveti's Eparchy of The Georgian Orthodox Church. Zestafoni is situated in the furthest east of the Kolkheti Plateau. The city is built on the both banks of the river Kvirila.

Zeda Sakara (also known as Sakara Verkhnyaya) is a community in the west of Georgia, about 40 km to the southeast of Kutaisi at an elevation of about 264 m, in the Zestaponi District. The village is about 1 km to the east of Kveda Sakara. The psychologist and philosopher Dimitri Uznadze was born in this village in 1886. The Sakara Testing Station of Horticulture, established in 1932, had many varieties of apples and pears. There are also many varieties of local Georgian grapevine.

Kveda Sakara (also known as Sakara Nizhnyaya) is a community in the west of Georgia, about 40 km to the southeast of Kutaisi at an elevation of about 263 m, in the Zestaponi District of the Imereti province (not to be confused with nearby Zeda Sakara in the same region. The community includes the villages of Kveda Sakara, Argevta and Chalatke. The economy is primarily agricultural, based on fruit growing. Kveda Sakara is known for the medieval Cholabauri bridge.

Shorapani is a small Georgian town, situated in the Zestafoni District, part of the region of Imereti. Founded in the 3rd century BC, it served as a residence of the eristavi (dukes) of Argveti (also known as the Duchy of Shorapani) in the Antiquity and the early Middle Ages. Near the town are the ruins of a fortress, mentioned as Sarapana by Strabo and Sarapanis by Procopius as a strong position on the road that led from Colchis to Iberia. 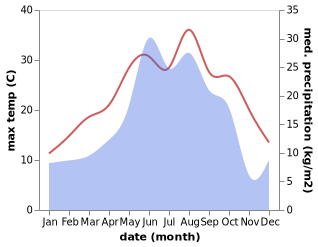