Time in Khashuri is now 06:32 AM (Wednesday) . The local timezone is named " Asia/Tbilisi " with a UTC offset of 4 hours. Depending on your budget, these more prominent places might be interesting for you: Tabriz, Erzurum, Vladikavkaz, Grozny, and Zemo-Brolosani. Being here already, consider visiting Tabriz . We collected some hobby film on the internet . Scroll down to see the most favourite one or select the video collection in the navigation. Check out our recomendations for Khashuri ? We have collected some references on our attractions page.

Kemperi is a village in Khashuri Municipality of Shida Kartli region in Georgia. The village is located in 11,5 km distance from Khashuri, and in 6,5 km from Surami, 800 m above sea level. According to the 2002 census it had a population of 470.

Surami is a small town in Georgia’s Shida Kartli region with the population of 9,800 (2002 Georgia Census). It is a popular mountain climatic resort and a home to a medieval fortress.

The village Kvishkheti is located in the Khashuri district of the Shida Kartli region in the Republic of Georgia. It is situated between the Likhi mountain range to the west and the Trialeti range to the east, and the Mtkvari River flows nearby. Kvishkheti's historical significance mainly comes from the 17th and 19th centuries. At the beginning of the 17th century Abbas I, Shah of Iran, drove the Turks out of Armenia, Kartli (Iberia) and Kakheti. The Turkish yoke was superseded by that of Iran.

The Surami Pass is a mountain pass in the Likhi Range of Georgia with an altitude of 949 metres . The pass connects the western and eastern part of Georgia. A railroad (in the tunnel) runs through the pass, as well as the Zestaponi-Khashuri highway. Rail service through Suramsky pass was opened in 1872. The rail line was electrified in 1933. 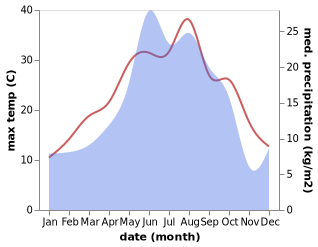