St. George's in the region of Saint George with its 7,500 inhabitants is a town in Grenada and is the capital of this country.

Current time in St. George's is now 04:49 PM (Monday) . The local timezone is named " America/Grenada " with a UTC offset of -4 hours. Depending on the availability of means of transportation, these more prominent locations might be interesting for you: Bridgetown, Fort-de-France, Scarborough, Port of Spain, and Roseau. Since you are here already, make sure to check out Bridgetown . We encountered some video on the web . Scroll down to see the most favourite one or select the video collection in the navigation. Where to go and what to see in St. George's ? We have collected some references on our attractions page.

Driving through the narrow city streets of St. George's, Grenada ..

Serenade of the Seas, February 2012

The Lime/Fantasia 2001 band. There are a couple shaky moments ..

National Cricket Stadium, previously known as Queen's Park, is the name of a cricket stadium complex in River Road, Grenada in the Caribbean and was a location for the 2007 Cricket World Cup. It became the 84th Test venue in 2002 when it hosted its first match between West Indies and New Zealand. After being rebuilt in 2000, the new complex was damaged in October 2004 as a direct result from Hurricane Ivan.

Police Ground is a multi-purpose stadium in St. George's, Grenada. It is currently used mostly for football matches. The stadium holds 10,000 people.

Grenada is an island country and Commonwealth realm consisting of the island of Grenada and six smaller islands at the southern end of the Grenadines in the southeastern Caribbean Sea. Grenada is located northwest of Trinidad and Tobago, northeast of Venezuela, and southwest of Saint Vincent and the Grenadines. Grenada is also known as the "Island of Spice" because of the production of nutmeg and mace crops of which Grenada is one of the world's largest exporters.

The Battle of Grenada took place on 6 July 1779 during the American War of Independence in the West Indies between the British Royal Navy and the French Navy, just off the coast of Grenada. The British fleet of Admiral Jack Byron had sailed in an attempt to relieve Grenada, which the French forces of the Comte D'Estaing had just captured. Incorrectly believing he had numerical superiority, Byron ordered a general chase to attack the French as they left their anchorage at Grenada.

Saint George is one of the parishes of Grenada, located on the south-western end of the island. The capital of Grenada, St. George, is located in this parish, and it is regarded as the most picturesque capital in the Caribbean. Its horseshoe-shaped harbour is surrounded by the pastel colors of warehouses and it is not uncommon to see red-tiled roofs on traditional shops and homes. Saint George is also the home of the world famous Grand Anse Beach and many of the island's holiday resorts. 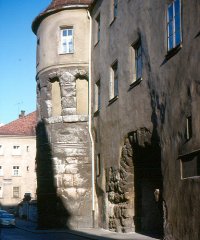