Discover Port of Spain in Trinidad and Tobago

Port of Spain in the region of City of Port of Spain with its 49,031 habitants is a town located in Trinidad and Tobago and is the capital of this country.

Local time in Port of Spain is now 01:15 AM (Friday) . The local timezone is named " America/Port of Spain " with a UTC offset of -4 hours. Depending on your flexibility, these larger cities might be interesting for you: Bridgetown, Georgetown, Fort-de-France, Woodbrook, and Tunapuna. When in this area, you might want to check out Bridgetown . We found some clip posted online . Scroll down to see the most favourite one or select the video collection in the navigation. Are you looking for some initial hints on what might be interesting in Port of Spain ? We have collected some references on our attractions page.

Trinidad Carnival... On the road with Pulse 8 and BAMABAC Crew - Carnival Tuesday. You know with us is always bacchanal!!! We had a blast for Carnival ! ! ! Check us out on facebook: www.facebook.com/ ..

Photogallery from the Trinidad Carnival. The Parade did take over 10 hours to pass through. ..

The annual sojourn to Trinidad and Tobago for most visitors and returning nationals is due to the allure of the Carnival. Those involved in the arts come to refresh their ideas, others come to tempora ..

A dedication to Lord Kitchener (read: Aldwyn Roberts), calypsonian, soca artiste and Trini, who in 1948 boarded the 'Empire Windrush' via Jamaica to seek his fortune in England at the age of 26. In En ..

Trinidad and Tobago, officially the Republic of Trinidad and Tobago, is an archipelagic state in the southern Caribbean, lying just off the coast of northeastern Venezuela and south of Grenada in the Lesser Antilles. It shares maritime boundaries with other nations including Barbados to the northeast, Grenada to the northwest, Guyana to the southeast, and Venezuela to the south and west.

Queen's Park Savannah is a park in Port of Spain, Trinidad and Tobago. Known colloquially simply as "the Savannah," it is Port of Spain's largest open space—and the world's largest traffic roundabout. It occupies about 260 acres of level land, and the distance around the perimeter is about 2.2 mi (3.5 km).

Queen's Park Oval, in Port of Spain, Trinidad and Tobago, is currently the largest capacity cricket ground in the West Indies and has hosted more Test matches than any other ground in the Caribbean. It also hosted a number of matches in the 2007 Cricket World Cup. It is privately owned by the Queen's Park Cricket Club and has seating for about 25,000. The Trinidad and Tobago cricket team play most of their home matches at the ground.

The Royal Botanic Gardens in Trinidad is located in Port of Spain. The Gardens, which were established in 1818, are situated just north of the Queen's Park Savannah. This is one of the oldest Botanic Gardens in the world. The landscaped site occupies 61.8 acres (25 hectares) and contains some 700 trees, of which some 13% are indigenous to Trinidad and Tobago, whilst others are collected from every continent of the world . The Gardens are open to the public every day of the year from 6 a.m.

House of Representatives (Trinidad and Tobago) 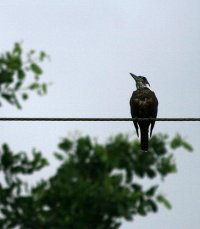 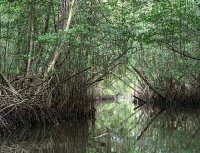 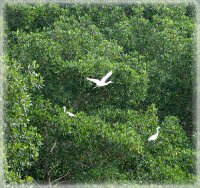