Time in Győr is now 09:47 AM (Saturday) . The local timezone is named " Europe/Budapest " with a UTC offset of 1 hours. Depending on your travel resources, these more prominent places might be interesting for you: Belgrade, Vienna, Eisenstadt, Veszprém, and Toltestava. Being here already, consider visiting Belgrade . We collected some hobby film on the internet . Scroll down to see the most favourite one or select the video collection in the navigation. Check out our recomendations for Győr ? We have collected some references on our attractions page.

Győr is the most important city of northwest Hungary, the capital of Győr-Moson-Sopron county and Western Transdanubia region, and — halfway between Budapest and Vienna — situated on one of the important roads of Central Europe. The city is the sixth largest in Hungary, and one of the seven main regional centres of the country.

The Rába is a river in southeastern Austria and western Hungary and a right tributary of the Danube. Its source is in Austria, some kilometres east of Bruck an der Mur below Heubodenhöhe Hill. It flows through the Austrian states of Styria and Burgenland, and the Hungarian counties of Vas and Győr-Moson-Sopron. It flows into a tributary of the Danube (Mosoni-Duna) in northwestern Hungary, in the city of Győr.

More reading: Wikipedia Article
Located at 47.68 17.63 (Lat./Long.); Less than 0 km away
Tags: International rivers of Europe, Rivers of Austria, Rivers of Burgenland, Rivers of Hungary, Tributaries of the Danube

The Battle of Ménfő was an important battle in the early history of the Kingdom of Hungary. Fought in 1044 at Ménfő, near Győr, between an army of mostly Germans and Hungarians, it was a victory for the Germans and thus for Westernising influences in Hungary. The Emperor Henry III invaded Hungary for the second time on 6 July 1044. His force was small and the Hungarian army of Samuel Aba large.

The National Theatre of Győr is a theatre in Győr, Hungary. Opened in 2 November 1978, it is the main theatre of the Győr-Moson-Sopron region. Until 1 January. 1992, it bore the name Kisfaludy Károly Theatre. In 2008 the number of visitors was 128 283, thus the theatre ranks as the 6th most visited in the country. 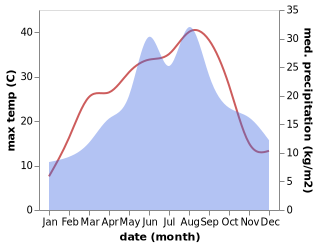