Local time in Basra is now 02:08 PM (Thursday) . The local timezone is named " Asia/Baghdad " with a UTC offset of 3 hours. Depending on your mobility, these larger cities might be interesting for you: Yusufan, At Taradiyah, Sabkbatal Arab, Muftiyah, and Kut as Sayyid. When in this area, you might want to check out Yusufan . We discovered some clip posted online . Scroll down to see the most favourite one or select the video collection in the navigation. Are you looking for some initial hints on what might be interesting in Basra ? We have collected some references on our attractions page.

Shatt Al-Arab University College is a private Iraqi university estableshed in 1993 in Basrah in the south of Iraq.

South Oil Company (SOC) is a national Iraqi company responsible for the oil in the south of Iraq. It is situated in Basrah, Iraq. South oil company is one of the major fundamental formations of the Iraq National Oil Company (INOC). It was the first nucleus and the basis of national direct investment projects in the 1970s, where the SOC was subsidiary to the national company.

Basra also written Basrah is the capital of Basra Governorate, in southern Iraq near Kuwait and Iran. It had an estimated population of 952,441 as of 2007, and 2,009,767 as of 2012. Basra is also Iraq's main port, although it does not have deep water access, which is handled at the port of Umm Qasr. The city is part of the historic location of Sumer, the home of Sinbad the Sailor, and a proposed location of the Garden of Eden.

Ţirād Khurr is said to be a place (possibly a small suburb, industrial zone, or historic monument) in the city of Basra, in the Basra Governorate province of Iraq. It is said to lie at latitude 30° 33' N, longitude 47° 45' E, and is very near to the Shatt al-Arab waterway. A single online source claims it has a population of approximately 13,300, but the name does not appear on large-scale maps of Basra.

More reading: Wikipedia Article
Located at 30.48 47.81 (Lat./Long.); Less than 6 km away
Tags: Organizations based in Kuwait 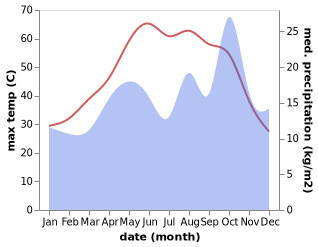