Time in Ahvaz is now 01:17 PM (Sunday) . The local timezone is named " Asia/Tehran " with a UTC offset of 3.5 hours. Depending on your budget, these more prominent places might be interesting for you: Basra, Al 'Amarah, Zargan, Shekareh, and Sedin-e Yek. Being here already, consider visiting Basra . We collected some hobby film on the internet . Scroll down to see the most favourite one or select the video collection in the navigation. Check out our recommendations for Ahvaz ? We have collected some references on our attractions page.

This is a video of Noorollah playing Toshmal and his son plying Dehol at a Lur & Bakhtiari wedding. Noorollah, is a celebrity among Bakhtiari people. He is one of the best Toshmal musicians in the reg ..

This is a night of celebrations and dance May 25, 1978 with Passargad International school staff and students in Ahvaz, Iran in my house. It was a memorable and exciting night. ..

The Ahvaz Ghadir Stadium is a new multi-use stadium in Ahvaz, Iran, has a capacity of 50,000 people and is owned by Iran Pro League side Foolad.

Ahvaz County is a county in Khuzestan Province in Iran. The capital of the county is Ahvaz. At the 2006 census, the county's population (including those portions that were later split off to form Bavi County) was 1,317,377, in 274,296 families; excluding those portions, the population was 1,235,712, in 259,873 families. The county is subdivided into two districts: the Central District and Hamidiyeh District. The county has two cities: Ahvaz and Hamidiyeh.

Ahwaz International Airport is an airport in Ahwaz, Iran. It offers jet service to domestic destinations including the capital, Tehran, and regional international destinations such as Kuwait. Saha Air services are operated by the world's last passenger-carrying examples of the Boeing 707. 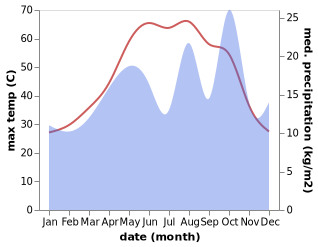