Current time in Kumanovo is now 08:56 PM (Friday) . The local timezone is named " Europe/Skopje " with a UTC offset of 1 hours. Depending on the availability of means of transportation, these more prominent locations might be interesting for you: Timişoara, Sofia, Staro Nagorichane, Skopje, and Rezhanovce. Since you are here already, make sure to check out Timişoara . We saw some video on the web . Scroll down to see the most favourite one or select the video collection in the navigation. Where to go and what to see in Kumanovo ? We have collected some references on our attractions page.

Rare Maserati Granturismo S MC Sport Line with 4.7 liter V8 engine that produces 440 BHP was being spotted in the Center of Skopje during the month of september in the 2010. It is Limited Edition of 2 ..

Milano Arena is a multi-purpose stadium in Kumanovo, Republic of Macedonia. It is used mostly for football matches and is the home stadium of FK Milano Kumanovo. It holds 7,000 people.

The Battle of Lopate (Serbian: Bitka na Lopatama) took place in 1796 between Old Montenegro and the Ottoman Empire near Lopate. Using Mahmut-pasha Bushatli's attack on Montenegro, Ottoman forces from Nikšić, Kolašin, Bihor, Bijelo Polje, Gusinje; likewise from Foča, Gacko, Stoci, Blagaj, Nevesinje, Trebinje and Korjenići; began advancing to the Montenegrin border. In early October 1796, when the Battle of Krusi occurred, a unit was organized, consisting of the soldiers from the mentioned towns.

The Kumanovska reka is a small river situated in the north - east part of the Republic of Macedonia. It flows mainly through the city of Kumanovo. Its spring is located on the Mountain Skopska Crna Gora. The Kumanovska Reka river is a right tributary of river Pčinja.

More reading: Wikipedia Article
Located at 42.08 21.78 (Lat./Long.); Less than 8 km away
Tags: Rivers of the Republic of Macedonia

Tabanovce is a village located in the north of the Republic of Macedonia, situated 8 km from the nearest town, Kumanovo. Its proximity to the border with Serbia gives the local crossing this village's name. The unusual ending "-ce" (-це) as opposed to "-ci" (-ци) reflects the local dialect, which is a form of Torlakian, similar to what is spoken in Kumanovo, and by the Serb population of Preševo.

Orašac is a town in the Kumanovo Municipality of Macedonia. Before 2003 it was a standalone municipality. The FIPS code for it was MK75. 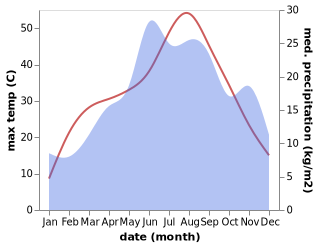