Local time in Victoria is now 12:10 AM (Thursday) . The local timezone is named " Asia/Kuching " with a UTC offset of 8 hours. Depending on your mobility, these larger cities might be interesting for you: Narra, Kota Kinabalu, Kampung Mempakul, Malikai, and Kampung Pohon Batu. When in this area, you might want to check out Narra . We discovered some clip posted online . Scroll down to see the most favourite one or select the video collection in the navigation. Are you looking for some initial hints on what might be interesting in Victoria ? We have collected some references on our attractions page.

Flying out at runway 32 of Labuan Airport (LBU) on board Malaysia Airlines flight MH 2608 to Kota Kinabalu (BKI), which departed at 12.10 pm. Our pilot was a bit crazy, he made a right turn too soon a ..

Preview of Venoth's blog at TravelPod. Read the full blog here: www.travelpod.com This blog preview was made by TravelPod using the TripAdvisor™ TripWow slideshow creator. Learn more about these video ..

Victoria is the capital of the Malaysian Federal Territory of Labuan, an island off the north coast of Borneo, though the term Bandar Labuan (Labuan City) is more prominently used than the former. The Financial Park along Jalan Merdeka houses the international offshore banks, insurance and trust companies. In 2012 Labuan has a population of over 85 000 many of those coming from around Malaysia (West/Peninsula Malaysia, State of Sabah & the State of Sarawak) and the number is still growing.

Kampung Lajau is a village in the Federal Territory of Labuan, Malaysia.

USS Salute (AM-294), was a U.S. Navy oceangoing minesweeper, laid down on 11 November 1942 by Winslow Marine Railway and Shipbuilding Co. , Seattle, Washington; launched on 6 February 1943; sponsored by Miss Patricia Lindgren; and commissioned on 4 December 1943, Lt. R. H. Nelson in command. 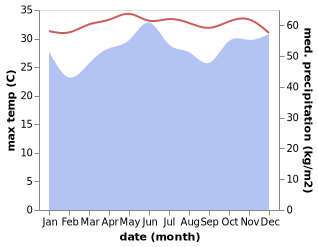