Current time in George Town is now 11:41 AM (Sunday) . The local timezone is named " Asia/Kuala Lumpur " with a UTC offset of 8 hours. Depending on the availability of means of transportation, these more prominent locations might be interesting for you: Surat Thani, Nakhon Si Thammarat, Medan, Yala, and Satun. Since you are here already, make sure to check out Surat Thani . We saw some video on the web . Scroll down to see the most favourite one or select the video collection in the navigation. Where to go and what to see in George Town ? We have collected some references on our attractions page.

Free video for my travelling friend epsos.de is about the journey from Penang Island to the rest of Malaysia. You can see the beautiful panorama of the Island in this video. Penang is the state in Mal ..

Full HD 1080p video (minus audio) showing abandoned pre-war shophouses, with some in ruins and overgrown with shrubs. This is right in the middle of the city. In actual fact this area has been ear-mar ..

The Khoo Kongsi is a large Chinese clanhouse with elaborate and highly ornamented architecture, a mark of the dominant presence of the Chinese in Penang, Malaysia. The famous Khoo Kongsi is the grandest clan temple in the country. It is also one of the city's major historic attraction.

Cheong Fatt Tze Mansion is located at 14 Leith Street, 10200 George Town, Penang, Malaysia. The mansion's indigo-blue outer wall makes it a very distinct building in the area. The Circa 1880s mansion built by the merchant Cheong Fatt Tze at the end of 19th century has 38 rooms, 5 granite-paved courtyards, 7 staircases & 220 vernacular timber louvre windows. The architecture of the mansion however originates from the Su Chow Dynasty Period in China.

More reading: Wikipedia Article
Located at 5.42 100.33 (Lat./Long.); Less than 1 km away
Tags: Buildings and structures in Penang, Houses in Malaysia

The Penang State Assembly Building is the historical Penang's state administrative building. It is located between Light Street and Farquhar Street near Fort Cornwallis in George Town, Malaysia.

City Hall is a municipal building in George Town, Penang, which was formerly the seat of the City Council of George Town. Originally built in 1903 as the Municipal Office, Penang, the building was erected at a cost of $100,000 to relieve demand for office space at the adjacent Town Hall, which then took on a more social function. Both buildings stand in front of the Padang on Esplanade Road. The name "City Hall" dates from the grant of city status to George Town in 1957.

Fort Cornwallis is an old star fort located on the northeastern coast of Penang, Malaysia. It is named after the late 18th century Governor-General of Bengal, India, Charles Cornwallis, 1st Marquess Cornwallis. Fort Cornwallis is the largest standing fort in Malaysia. In its entire history, the fort had never engaged in any battle. 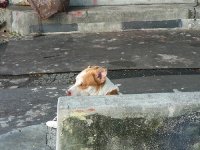 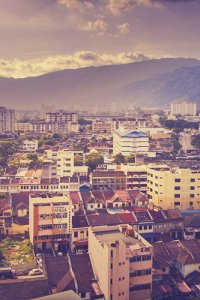 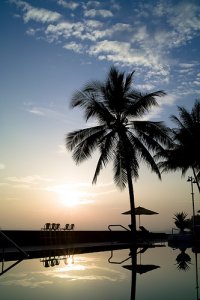 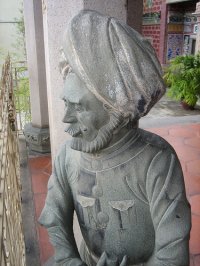 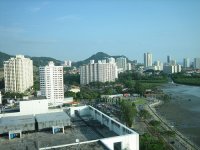 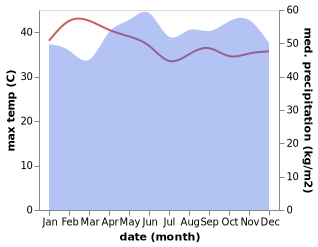