Plymouth in the region of Saint Anthony is a city located in Montserrat and is the capital of this country.

Time in Plymouth is now 09:46 PM (Wednesday) . The local timezone is named " America/Montserrat " with a UTC offset of -4 hours. Depending on your travel resources, these more prominent places might be interesting for you: Fort-de-France, Basseterre, Roseau, St. John's, and Bolands. Being here already, consider visiting Fort-de-France . We collected some hobby film on the internet . Scroll down to see the most favourite one or select the video collection in the navigation. Check out our recommendations for Plymouth ? We have collected some references on our attractions page.

www.framebyframejm.tv. A selection of performances by Arrow, Alphonsus Celestine Edmund Cassell, MBE, from the 10th anniversary of the St. Kitts Music festival, and The 2006 Air Jamaica Jazz and Blues ..

Montserrat was home for us for 11 years from '95-'06, but it was time for us to fly away in '07. So, we post some of our favorite pictures taken over those years as a tribute to the beauty of Montserr ..

The Soufrière Hills Volcano, Montserrat, West Indies, began erupting on July 18, 1995. Since then, the area has been evacuated and it is now a no-land zone. This video was shot from a helicopter: gogi ..

Part 3 of a helicopter ride around the Montserrat volcano. Leaving the crater the helicopter heads towards the southern tip of the island with a circle around Radio Antilles and futher up the west coa ..

Plymouth is the de jure capital of the island of Montserrat, an overseas territory of the United Kingdom located in the Leeward Island chain of the Lesser Antilles, West Indies. The town was overwhelmed by volcanic eruptions starting in the 1990s and was abandoned. For centuries it had been the only port of entry to the island.

Sturge Park was a cricket ground located on five acres of land adjacent to Plymouth, Montserrat. The ground, used by the Montserrat cricket team and infrequently by the Leeward Islands cricket team, was destroyed in the Soufrière Hills eruption of 1997.

More reading: Wikipedia Article
Located at 16.71 -62.23 (Lat./Long.); Less than 2 km away
Tags: Buildings and structures in Montserrat, Cricket grounds in the West Indies

The Salem Oval is a cricket ground located in the village of Salem, Montserrat. The ground was constructed following the destruction of Montserrat's main cricket ground in Plymouth, which was destroyed in the Soufrière Hills eruption of 1997.

More reading: Wikipedia Article
Located at 16.75 -62.22 (Lat./Long.); Less than 5 km away
Tags: Buildings and structures in Montserrat, Cricket grounds in the West Indies 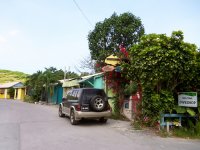 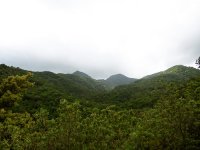 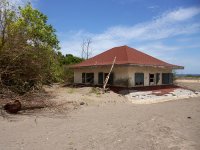 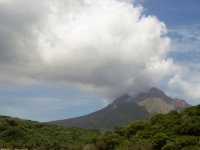