Salem in the region of Saint Peter with its 680 inhabitants is a place in Montserrat - some 3 mi or ( 5 km ) North of Plymouth , the country's capital city .

Time in Salem is now 07:51 AM (Thursday) . The local timezone is named " America/Montserrat " with a UTC offset of -4 hours. Depending on your budget, these more prominent locations might be interesting for you: Fort-de-France, Basseterre, Roseau, St. John's, and Bolands. Since you are here already, consider visiting Fort-de-France . We saw some hobby film on the internet . Scroll down to see the most favourite one or select the video collection in the navigation. Where to go and what to see in Salem ? We have collected some references on our attractions page.

www.framebyframejm.tv. A selection of performances by Arrow, Alphonsus Celestine Edmund Cassell, MBE, from the 10th anniversary of the St. Kitts Music festival, and The 2006 Air Jamaica Jazz and Blues ..

This video is a compilation of clips from field work on the Soufriere Hills Volcano, Montserrat, in late 2005. During the trip, we recorded the shape of the lava dome at the volcano and its rate of gr ..

Montserrat was home for us for 11 years from '95-'06, but it was time for us to fly away in '07. So, we post some of our favorite pictures taken over those years as a tribute to the beauty of Montserr ..

The Salem Oval is a cricket ground located in the village of Salem, Montserrat. The ground was constructed following the destruction of Montserrat's main cricket ground in Plymouth, which was destroyed in the Soufrière Hills eruption of 1997.

More reading: Wikipedia Article
Located at 16.75 -62.22 (Lat./Long.); Less than 0 km away
Tags: Buildings and structures in Montserrat, Cricket grounds in the West Indies

More reading: Wikipedia Article
Located at 16.76 -62.22 (Lat./Long.); Less than 1 km away
Tags: Buildings and structures in Montserrat, Government Houses of the British Empire and Commonwealth, Governors of Montserrat, Official residences

Montserrat is a Caribbean island that is a British Overseas Territory. It is located in the Leeward Islands, part of the chain of islands known as the Lesser Antilles, in the West Indies. The island of Montserrat measures approximately 16 km long and 11 km wide, with approximately 40 kilometres of coastline. Montserrat is nicknamed The Emerald Isle of the Caribbean both for its resemblance to coastal Ireland and for the Irish ancestry of some of its inhabitants.

Sturge Park was a cricket ground located on five acres of land adjacent to Plymouth, Montserrat. The ground, used by the Montserrat cricket team and infrequently by the Leeward Islands cricket team, was destroyed in the Soufrière Hills eruption of 1997.

More reading: Wikipedia Article
Located at 16.71 -62.23 (Lat./Long.); Less than 4 km away
Tags: Buildings and structures in Montserrat, Cricket grounds in the West Indies 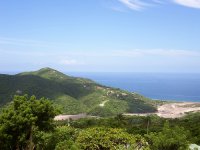