Time in Ado-Ekiti is now 09:26 PM (Saturday) . The local timezone is named " Africa/Lagos " with a UTC offset of 1 hours. Depending on your travel resources, these more prominent places might be interesting for you: Malabo, Osogbo, Minna, Lokoja, and Kaduna. Being here already, consider visiting Malabo . Check out our recomendations for Ado-Ekiti ? We have collected some references on our attractions page.

Iyin-Ekiti is a town in Ekiti State, Nigeria, near to Ado. It is at an elevation of 457 m The town was established between 1951 and 1954, when the Uyin people of the villages of Araromi, Okesale, Oketoro and Okelawe moved to the site, then sparsely occupied. Iyin now has eight primary and three post primary Schools, a modern police station and barracks, a general post office, a local government maternity centre and a general hospital. The town also has a micro-finance bank.

Ekiti State University of Ado Ekiti (EKSU) was established as Obafemi Awolowo University, Ado-Ekiti on March 30, 1982 by the administration of late Chief Michael Adekunle Ajasin, the first civilian governor of Ondo State. The university is a member of the Association of Commonwealth Universities. It is located about 12 minutes drive from the centre of the city of Ado-Ekiti in Western Nigeria.

Ikere-Ekiti, also known as Ikere or Ikerre, is a city in Ekiti State of Nigeria. In Ikere Local Government. It is an agricultural centre. According to the 1991 census, the population was 59,257 but more current estimates put it at more than 100,000. Ikere is a town endowed with magnificent hills, including Orole and Olosunta. The town is located between Ado-Ekiti (the capital of Ekiti State) and Akure(the capital of Ondo State). The gateway to Ekiti Land.

Ise Ekiti (Yoruba: Ìṣẹ̀-Èkìtì, also Ise) is a city in Ekiti State, Nigeria, It is the traditional home of Akinluaduse, also known as Akinluse by the inhabitants of the city. Akinluse was a great warrior in the ancient Oyo empire. Ise - Ekiti is the headquarter of the Ise/Orun Local Government Area, along with Orun. Its geographic coordinates are {{#invoke:Coordinates|coord}}{{#coordinates:7|27|36|N|5|25|12|E|region:NG_type:city(204022) |primary |name= }}. 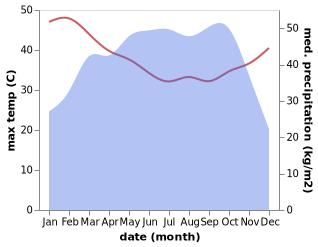