Delve into Sonbong in North Korea

Current time in Sonbong is now 07:55 PM (Tuesday) . The local timezone is named " Asia/Pyongyang " with a UTC offset of 9 hours. Depending on your travel modalities, these larger destinations might be interesting for you: Wonsan, Hamhung, Vladivostok, Yangmulinzi, and Wangqing. While being here, make sure to check out Wonsan . Are you curious about the possible sightsseing spots and facts in Sonbong ? We have collected some references on our attractions page.

Tumangang Workers' District is a town in Sonbong, Rason, North Korea. It is the closest town of North Korea to the border with Russia. Tumangang sits on the Tumen River, and across the river is the Russian settlement of Khasan and the Chinese settlement of Fangchuancun. A train connects Khasan with Tumangang and from there to Rason. A road also connects Tumangang and Sonbong. 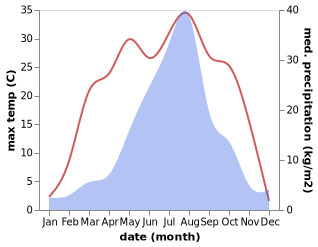