Delve into Vikersund in Norway

Current time in Vikersund is now 05:24 PM (Monday) . The local timezone is named " Europe/Oslo " with a UTC offset of 1 hours. Depending on your travel modalities, these larger destinations might be interesting for you: Aarhus, Aalborg, Helsingborg, Gothenburg, and Verp. While being here, make sure to check out Aarhus . We encountered some video on the web . Scroll down to see the most favourite one or select the video collection in the navigation. Are you curious about the possible sightsseing spots and facts in Vikersund ? We have collected some references on our attractions page.

Vikersund Station is a railway station located at the village of Vikersund in Modum, Norway, on the Randsfjorden Line. The station is served by some express trains between Bergen and Oslo operated by Norges Statsbaner.

The Krøderen Line is a heritage railway line connecting the Krøderen lake in Buskerud, Norway, to the town of Vikersund. The 26-kilometre line was built as a narrow gauge branch line of the Randsfjord Line by the Norwegian State Railways (NSB) and opened in 1872. Passenger services were withdrawn in 1958, and freight traffic in 1985. As of 2011, the Krøderen Line Foundation and the Norwegian Railway Club jointly operate steam train services on the line from May to October.

Geithus is a village in Modum municipality, Norway.

Vikersundbakken is a ski flying hill at Vikersund in Modum, Norway. It is largest in the world. Five world records have been set in the hill, with the current of 246.5 meters being set by Johan Remen Evensen. The complex also consists of a large hill, a normal hill and several training hills. The hill opened in 1936 as a large hill. It was rebuilt to become a ski flying hill in 1964 and has later been converted in 1989, 1999 and 2010. The large hill was built in 1988.

Sysle is a village in the municipality of Modum, Norway. Its population (2005) is 227. Sysle is located between Highway 280 (Riksvei 280) and the Snarumselva, a continuation of the Hallingdal River which flows from Lake Krøderen. It is situated about five miles west of Vikersund, the municipality capital of Modum. There is a rail stop at Sysle Station on the Krøderbanen railway line which runs from Vikersund to Krøderen. 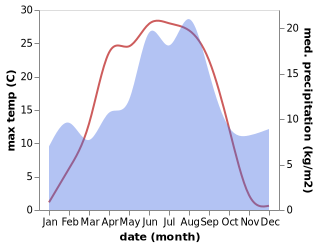