Current time in Aalborg is now 12:14 AM (Tuesday) . The local timezone is named " Europe/Copenhagen " with a UTC offset of 1 hours. Depending on the availability of means of transportation, these more prominent locations might be interesting for you: Vodskov, Viborg, Vester Halne Enge, Vestbjerg, and Varst. Since you are here already, make sure to check out Vodskov . We saw some video on the web . Scroll down to see the most favourite one or select the video collection in the navigation. Where to go and what to see in Aalborg ? We have collected some references on our attractions page.

J-Dag: When the Christmas Beer arrives...

On J-Dag breweries in Denmark publish their Christmas beers (julebryg) and celebrate the beginning of the holiday season for beer drinkers. These are impressions of J-Dag, Nov 5th 2010 in Aalborg, Jom ..

North Jutland County is a former county in northern Denmark. It was located on the eastern half of Vendsyssel-Thy and the northernmost part of the Jutland peninsula. It was the largest county in Denmark, but with a relatively low population. The county seat was Aalborg, Denmark's fourth largest city. The county was abolished effective January 1, 2007, when it merged into North Denmark Region.

St Budolfi Church is the cathedral church for the Lutheran Diocese of Aalborg in north Jutland, Denmark.

Aalborg Historical Museum (Danish: Aalborg Historiske Museum) is a historical and cultural museum in the city of Aalborg in Denmark. The museum was established in 1863.

Aalborg Metal Festival is a heavy metal festival held annually in Aalborg, Denmark since 2002. The 2008 festival took place on November 6-8 at Studenterhuset in Aalborg.

Hospital of the Holy Ghost, Aalborg

The Hospital of the Holy Ghost, Aalborg (Danish: Helligåndsklostret i Aalborg), the buildings of which, although now without any religious function, are still known as Aalborg Kloster (lit. Aalborg Monastery), is a former establishment of the Order of the Holy Ghost in Aalborg, Denmark. It was the hospital of Aalborg from 1431 to 1953 and is one of Denmark's best preserved medieval establishments. 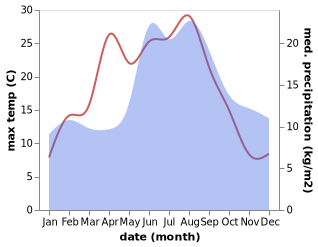