Delve into Hammerfest in Norway

Local time in Hammerfest is now 03:57 PM (Thursday) . The local timezone is named " Europe/Oslo " with a UTC offset of 1 hours. Depending on your mobility, these larger destinations might be interesting for you: Pajala, Kiruna, Gällivare, Enontekiö, and Oksfjord. While being here, you might want to check out Pajala . We discovered some clip posted online . Scroll down to see the most favourite one or select the video collection in the navigation. Are you curious about the possible sightseeing spots and facts in Hammerfest ? We have collected some references on our attractions page.

Industrial Photo. If you need a video or photos for your company, send me a request. I would be glad to make something nice about your business, and to document the work that is made. Best regards Pet ..

Anold Super 8 movie with stereo sound. To view in stereo and high resolution mode, append &fmt=18 to the end of the URL and press Enter. Background music: Morning and Mountain king from Peer Gynt by G ..

Ahigh-resolution slide show with stereo sound and no transition effects. The dates of the pictures are shown in form of yymmdd on the screen. Every slide lasts 8 or 9 seconds. To view in stereo and hi ..

The Royal and Ancient Polar Bear Society is a small museum in the town of Hammerfest, Norway The significance of the polar bear is that this animal is the town's mascot and heraldic crest. For all its remoteness, Hammerfest has a long history as a trading port, and Isbjørnklubben as it is called in Norwegian - meaning simply Polar Bear Club - sets out to commemorate this.

More reading: Wikipedia Article
Located at 70.66 23.68 (Lat./Long.); Less than 0 km away
Tags: 1963 establishments in Norway, Culture of the Arctic, Hammerfest, Local museums in Norway, Museums established in 1963, Museums in Finnmark

Fuglenes Lighthouse was a coastal lighthouse located in the municipality of Hammerfest in Finnmark, Norway. It was established in 1859, and deactivated in 1911, when it was replaced by a light.

Korvettenkapitän (naval corvette captain or lieutenant-commander) of the Reserves Wolfgang Kaden (5 December 1899 – 9 July 1942) was a Knight's Cross of the Iron Cross recipient during World War II. He is credited with the sinking of at least three submarines including the British submarine HMS H49 on 18 October 1940 off of Texel and the Soviet submarine K-23 commanded by Magomet Gadzhiyev on 12 May 1942 off of Nordkyn.

Melkøya is an island in Hammerfest Municipality in Finnmark county, Norway. The island sits just west of the town of Hammerfest. The 0.69-square-kilometre island is connected to the town of Hammerfest (on the island of Kvaløya by the Melkøysund Tunnel which was completed in 2003. The industrial island is the endpoint of the undersea pipeline that transports natural gas from the Snøhvit natural gas fields in the Barents Sea. 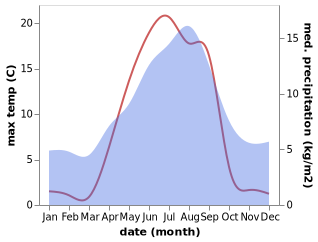