Local time in Lakselv is now 04:56 PM (Sunday) . The local timezone is named " Europe/Oslo " with a UTC offset of 1 hours. Depending on your mobility, these larger cities might be interesting for you: Pajala, OEvertornea, Rovaniemi, Karasjok, and Honningsvåg. When in this area, you might want to check out Pajala . We discovered some clip posted online . Scroll down to see the most favourite one or select the video collection in the navigation. Are you looking for some initial hints on what might be interesting in Lakselv ? We have collected some references on our attractions page.

Many perfect days at the cabin/summerhouse in Porsanger. Some great finds too! :) ..

Lakselv Church is a parish church in Porsanger Municipality in Finnmark county, Norway. It is located in the village of Lakselv. The church is part of the Porsanger parish in the Indre Finnmark deanery in the Diocese of Nord-Hålogaland. The white, wooden church was built in 1963 by the architect Eyvind Moestue. The church seats about 400 people.

Station Group Banak, formerly Banak Air Station (Banak flystasjon), is a military airbase located at Banak, just north of Lakselv in Porsanger, Norway. Operated by the Royal Norwegian Air Force (RNoAF), it serves a detachment of the 330 Squadron, which operates two Westland Sea King helicopters used for search and rescue operations. Of the station's two helicopters, one is on standby at any given time.

Lakselva is a river in Finnmark county in northern Norway. It begins in Karasjok Municipality runs north through Porsanger Municipality into the Porsangerfjorden, a fjord off of the Barents Sea. The 103-kilometre long river runs past the village of Lakselv. The European route E06 highway runs along the river for much of its course.

The Porsangerfjorden is a fjord in Finnmark county, Norway. The 123-kilometre long fjord is Norway's fourth longest fjord. It is located in the municipalities of Nordkapp and Porsanger and it empties out into the Barents Sea. The large island of Magerøya and the Porsanger Peninsula lie along the western shore of the fjord, and the Sværholt Peninsula lies along the eastern shore of the fjord. Helnes Lighthouse sits at the mouth of the fjord, on the western coast. 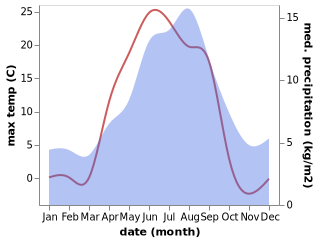