Local time in Storslett is now 08:26 AM (Saturday) . The local timezone is named " Europe/Oslo " with a UTC offset of 1 hours. Depending on your flexibility, these larger cities might be interesting for you: Kiruna, Ytre Eide, Tretta, Storneshamn, and Storbukta. When in this area, you might want to check out Kiruna . We found some clip posted online . Scroll down to see the most favourite one or select the video collection in the navigation. Are you looking for some initial hints on what might be interesting in Storslett ? We have collected some references on our attractions page.

the memory of a trip to the top of the world. ..

Nordreisa Church is a parish church in the municipality of Nordreisa in Troms county, Norway. It is located in the village of Storslett. The church is part of the Nordreisa parish in the Nord-Troms deanery in the Diocese of Nord-Hålogaland. The white wooden church seats about 350 people. It was built in 1856 by the architect Christian Heinrich Grosch, and it was consecrated on 8 October 1856 by the Bishop Knud Gislesen.

Sørkjosen Airport is a regional airport located at Sørkjosen in Nordreisa, Norway, 4.5 kilometres from the municipal center of Storslett. Owned and operated by the state-owned Avinor, it handled 16,993 passengers in 2012. The airport has a 880-meter runway and is served by Widerøe, which operates regional routes using the Dash 8-100 to Tromsø and communities in Finnmark on public service obligation contracts.

Reisafjorden is a fjord in the municipality of Nordreisa (with very small parts in Kvænangen and Skjervøy municipalities) in Troms county, Norway. The 30-kilometre long fjord is an arm off the main Kvænangen. The fjord is fed by the river Reisaelva which flows through the 80-kilometre long Reisadalen valley which starts inside Reisa National Park. The villages of Storslett and Sørkjosen are both located along the southern shore of the fjord.

The Maursund Tunnel is an undersea tunnel in Troms county, Norway. The tunnel goes under the Maursundet strait connecting the mainland part of Nordreisa municipality with the island of Kågen in Skjervøy municipality. The 2,122-metre long tunnel reaches a depth of −92.5 metres below sea level and has a 10% grade in some parts of the tunnel. The tunnel, which was opened in 1991, and the nearby Skattørsundet Bridge connect the large village of Skjervøy to the mainland. 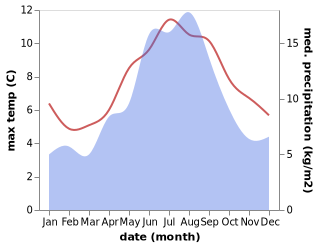