Peshawar in the region of North-West Frontier Province with its 1,218,773 inhabitants is a place in Pakistan - some 86 mi or ( 139 km ) West of Islamabad , the country's capital city .

Time in Peshawar is now 12:14 AM (Monday) . The local timezone is named " Asia/Karachi " with a UTC offset of 5 hours. Depending on your budget, these more prominent locations might be interesting for you: Sarāi Malik Wazīr, Dheri Baghbanda, Kabul, Jalalabad, and Basawul. Since you are here already, consider visiting Sarāi Malik Wazīr . We saw some hobby film on the internet . Scroll down to see the most favourite one or select the video collection in the navigation. Where to go and what to see in Peshawar ? We have collected some references on our attractions page.

The streets and the bazars of Peshawar (in 1990)

ATTENTION / CAUTION / VORSICHT / 注意危險 / حذر / PRECAUTION / ATENCAO / 주의! / Watch this movie only if you are interested by Pakistan in 1990. I have retrieved this old film of my trip in the north of Pa ..

Photo Video of the City of Peshawar Pakistan and The Khyber Pass taken in 1968 when iwas in the USAF Security Service stationed at Peshawar Air Station in Badaber. ..

Bala Hissar is one of the most historic places of Peshawar. The word Bala Hissar is from Dari Persian, meaning, “elevated or high fort”. The name was given by the Pashtun King Timur Shah Durrani (1773–1793), who used the fort as the winter capital of the Afghan Durrani Empire, with the summer capital being in Kabul. The Sikh empire who conquered Peshawar in the early 19th century named it Samir Garh in 1834 but the name did not become popular.

The Mahabat Khan Mosque is a 17th century mosque in Peshawar, Khyber Pakhtunkhwa, Pakistan. It is named after the Mughal governor of Peshawar Nawab Mahabat Khan who served under Emperors Shah Jehan and Aurangzeb and who was the grandson of Nawab Dadan Khan (who had been governor of Lahore). The name of the Masjid and the governor who built is consistently mispronounced as 'Muhabbat Khan' ('Love Khan') by the public instead of 'Mahabat Khan' ('Awe-inspiring Khan'). The Mosque was built in 1630.

The Khyber Pakhtunkhwa Assembly (formerly NWFP) is the unicameral legislative body of the Khyber Pakhtunkhwa province in Pakistan. It was established under Article 106 of the Constitution of the Pakistan. The assembly has 124 elected members, 99 regular seats, 22 seats reserved for women and 3 seats for Non-Muslims.

The Lady Reading Hospital is located at Peshawar in the Khyber Pakhtunkhwa of Pakistan. It is one of the most important Post Graduate Medical Institute in Pakistan. It is also called loye (big) huspatal (hospital) and Gernali Huspatal. It is named after Lady Reading, the wife of the Viceroy of India, Lord Reading. It is the biggest hospital of Khyber Pakhtunkhwa province providing tertiary care facilities.

Arbab Niaz Stadium is a Test cricket ground in Peshawar, Khyber Pukhtunkhwa, Pakistan. It replaced the Peshawar Club Ground as the home ground for the Peshawar cricket team in 1985. The ground has hosted 17 ODIs since 1984 (including two where no play was possible), and seven Test matches since 1995, most recently in 2003. The ground has a seating capacity of 20,000. 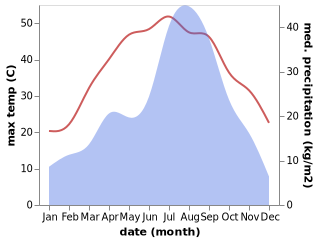