Kabul in the region of Kabul with its 3,043,532 citizens is located in Afghanistan and is the capital of this country.

Time in Kabul is now 12:13 AM (Saturday) . The local timezone is named " Asia/Kabul " with a UTC offset of 4.5 hours. Depending on your budget, these more prominent places might be interesting for you: Mehtar Lam, Khost, Kandahar, Kabul, and Jalalabad. Being here already, consider visiting Mehtar Lam . We collected some hobby film on the internet . Scroll down to see the most favourite one or select the video collection in the navigation. Check out our recomendations for Kabul ? We have collected some references on our attractions page.

KABUL TRANSIT - a documentary film www.kabultransit.net In the broken cityscape of Kabul Afghanistan, amid the dust and rubble of ... all » war, Westerners and Afghans adjust to the uncertain possibil ..

The Aisha-i-Durani School or Durani High School is a girls' school in Kabul, Afghanistan. It is one of two schools reconstructed with German help after the fall of the Taliban in 2001, the other being Amani High School.

The Ministry of Communications and Information Technology (MCIT) is an organ of the government of Afghanistan. Current communications minister is Amirzai Sangin. At the end of 2001, there were an estimated 35,000 phones working in all of Afghanistan serving a population of 27 million, one of the lowest teledesities in the world. Calls could only be completed over satellite facilities and only among Afghanistan's six major urban areas.

Pul-e Khishti Mosque is the largest mosque in Kabul, Afghanistan. Located in the center of old Kabul, the Pul-e Khishti Mosque can be identified by its large blue dome. The mosque originally was erected in the late 18th Century, but largely rebuilt under Zahir Shah in the late 1960s. It was damaged during recent fighting in the area, but is one of the few buildings in the area which has had restoration work done on it.

More reading: Wikipedia Article
Located at 34.52 69.18 (Lat./Long.); Less than 2 km away
Tags: Buildings and structures in Kabul, Mosques in Kabul

Ghazi Stadium is a multi-purpose stadium in Kabul, Afghanistan,used to play soccer. It was built during the reign of King Amanullah Khan in 1923, who was regarded as Ghazi (Hero) for the Afghan victory in the Third Anglo-Afghan War and gaining independence for his nation after the 1919 Treaty of Rawalpindi. The stadium has a capacity of 25,000 people. The Ghazi Stadium was renovated in 2011 after the entire ground was removed and replaced with new soil and artificial turf placed on top.

Kabul District is a district of Kabul Province, Afghanistan. The seat lies at Kabul. 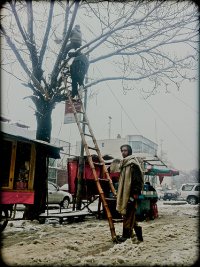 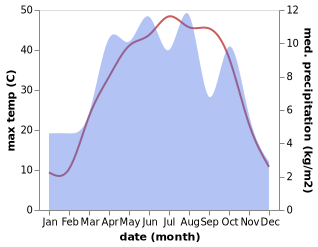