Delve into Mehtar Lam in Afghanistan

Current time in Mehtar Lam is now 07:58 PM (Thursday) . The local timezone is named " Asia/Kabul " with a UTC offset of 4.5 hours. Depending on your travel modalities, these larger destinations might be interesting for you: Shorava, Qarghah'i, Mindrawur, Marwande Kelay, and Kohistani. While being here, make sure to check out Shorava . We encountered some video on the web . Scroll down to see the most favourite one or select the video collection in the navigation. Are you curious about the possible sightsseing spots and facts in Mehtar Lam ? We have collected some references on our attractions page.

Alishing District is a district in Afghanistan, located 21 km from Mihtarlam, the provincial centre of Laghman Province. It has borders with Kabul and Kapisa provinces to the West, Dawlat Shah District to the North, Alingar District to the East and Mihtarlam District to the South. The population is 63,200 (2006) - 60% of them Pashai, 25% Pashtun and 15% Tajik.

The Lalkhanabad village is the center of Qarghayi District of Laghman Province, Afghanistan. It is located on {{#invoke:Coordinates|coord}}{{#coordinates:34.5531|N|70.2269|E||||| | |name= }} at 638 m altitude between the Kabul River and its tributary - the Alingar River.

Char Bagh is an area within Laghman Province, Afghanistan and is observable from the Jalalabad-Kabul Road. According to some sources, when Alexander the Great entered the region, he built a town between Char Bagh and Mandrawar after the Greek god of victory.

Alingar District is located approximately 27 km from Mehtarlam, the provincial capital of Laghman Province and borders with Alishing and Dawlat Shah districts to the West, Nuristan Province to the North, Kunar and Nangarhar provinces to the East and Qarghayi and Mihtarlam districts to the South. It has about 60 villages located in four main valleys. The population is 85,600 (2006) - 70% of them Pashtun, 20% Pashai and 5% Tajik.

The Darunta Dam is a hydroelectric power dam located on the Kabul River, approximately 7 km west of Jalalabad, the capital of Nangarhar Province in eastern Afghanistan. Darunta Dam was constructed by Soviet Union (USSR) companies in 1964 and its power station contains three vertical Kaplan turbines (six-blade propeller) with a rated output of 3.85 MW each. 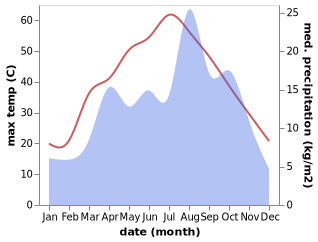