Current time in Jacobabad is now 07:22 PM (Tuesday) . The local timezone is named " Asia/Karachi " with a UTC offset of 5 hours. Depending on the availability of means of transportation, these more prominent locations might be interesting for you: Kandahar, Jan Muhammad, Khairpur, Tharari Bhaleno, and Tajpur. Since you are here already, make sure to check out Kandahar . We encountered some video on the web . Scroll down to see the most favourite one or select the video collection in the navigation. Where to go and what to see in Jacobabad ? We have collected some references on our attractions page.

This clock is a hand made clock which was made by John Jacob (an English General) in 1850. This famous city of Pakistan Jacobabad is a;so on the neame of Jhon Jackob. ..

Jacobabad Railway Station is located in middle of the Jacobabad, Sindh, Pakistan. Jacobabad is also a railway junction on Pakistan Railways network with tracks branching off to Kashmore and Dera Ghazi Khan. It is staffed and has a booking office.

Jacobabad District is a district of Sindh, Pakistan. According to the 1998 census it had a population of 1,425,572 of which 24.10% were urban. The city of Jacobabad is the capital of the District.

PAF Base Shahbaz is located at Jacobabad, in the Sindh province of Pakistan. It is a military base, operated by the Pakistan Air Force, as well as a civilian airport. Although originally used as a base for US drones, PAF's AVM Arshad Quddus states that Shahbaz Air Force Base is now under the PAF control: "The Shahbaz Airbase is under complete operational control of the PAF. If you see any American let me know.... Seeing is believing... there are no drones and no Americans.

Rojhan, (Rojhan Mazari) is a city and capital of Rojhan Tehsil in Rajanpur District. Where the Mazari Chief Estate is located and it is situated in District Rajanpur of Punjab at the foot of the Sulaiman Range, near the inter-provincial borders of Balochistan, Sindh and Punjab. This city is the Capital Seat and headquarters of the Mazari Baloch tribe who have held this territory since 1632. 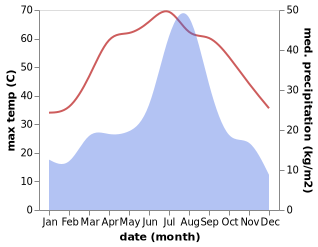