Time in Sukkur is now 11:11 PM (Sunday) . The local timezone is named " Asia/Karachi " with a UTC offset of 5 hours. Depending on your budget, these more prominent places might be interesting for you: Kandahar, Thahri, Patni, Mandodero, and Khairpur. Being here already, consider visiting Kandahar . We collected some hobby film on the internet . Scroll down to see the most favourite one or select the video collection in the navigation. Check out our recommendations for Sukkur ? We have collected some references on our attractions page.

While staying at Khairpur, we made a short trip to Sukkur also. We took this video of Sukkur Barrage while travelling over it. Just a fraction of the majesty of this barrage and the mighty Indus can b ..

This Clip Taken from Karbala Karbala Cd more about this visit www.karbala.rohri.net ..

Sukkur Barrage is a barrage on the River Indus near the city of Sukkur in the Sindh province of Pakistan.

Ayub Bridge is a railway bridge over the Indus river between Rohri and Sukkur in Sindh province, Pakistan. The foundation stone of this steel arch bridge was laid on 9 December 1960 and inaugurated by President Muhammad Ayub Khan on 6 May 1962. The consulting engineer was David B. Steinman. The Ayub Bridge became the world's third longest railway arch span and the first railway bridge in the world to be slung on coiled wire rope suspenders.

More reading: Wikipedia Article
Located at 27.69 68.89 (Lat./Long.); Less than 3 km away
Tags: Bridges in Pakistan, Bridges over the Indus River, Buildings and structures in Sindh, Railway bridges in Pakistan

The Lansdowne Bridge Rohri is a former railway bridge over the Indus River in present-day Pakistan. A marvel of 19th-century engineering, the 'longest 'rigid' girder bridge in the world' at that time, it was begun in 1887. It was designed by Sir Alexander Meadows Rendel; the girder work, weighing a massive 3,300 tons, was manufactured in London by the firm of Westwood, Baillie and erected by F.E. Robertson, and Hecquet.

Sukkur Airport is a domestic airport situated about 8 km away from the city centre of Sukkur in the Sukkur District in the Sindh province of Pakistan. It is a medium-sized airport and caters mainly to the population of Sukkur, Khairpur and Rohri. It is the main alternate of Jinnah International Airport in Karachi with a distance of about 350 km/220 miles; well under an hour's flight time in turboprop aircraft. 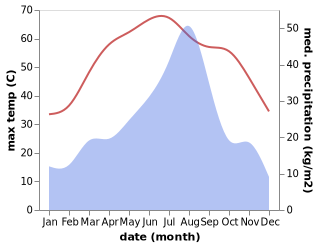